So Nanowrimo 2014 has officially kicked off as of yesterday. As I posted a couple of weeks ago, I wasn't originally planning on doing Nanowrimo this year, but after having one of those "shower thoughts" moments, I decided to work on a collection of short stories. So far I have been doing really well. Last year my target word count for each day was 1,500 words. That is slightly below Nano's stated word count, but I felt it was a manageable goal for a new comer. This year I do still have that as my stated target daily word count, but after two days I am sitting comfortably at 3,396 words.

To give you a quick synopsis of my story idea, my short stories are a collection of adventures for my characters Apath and Spice. They are a husband and wife rapid delivery team set in a sort of despotic sic-fi future. It is all very sci-fi tropish, but I am hoping that I can get some fun stories out of the two characters and their interactions. I am taking a lot of influence from "Cowboy Bebop" for this design. I always loved how that series balanced comedy, action and some remarkably heavy topics.

Here is a quick list of my character profiles for both Apath and Spice. These were brainstormed with my wife and I one evening and truthfully the character profiles are loosely based upon the two of us. Of course, I have attached a little snippet and you can hit the "read more" button below to check that out. 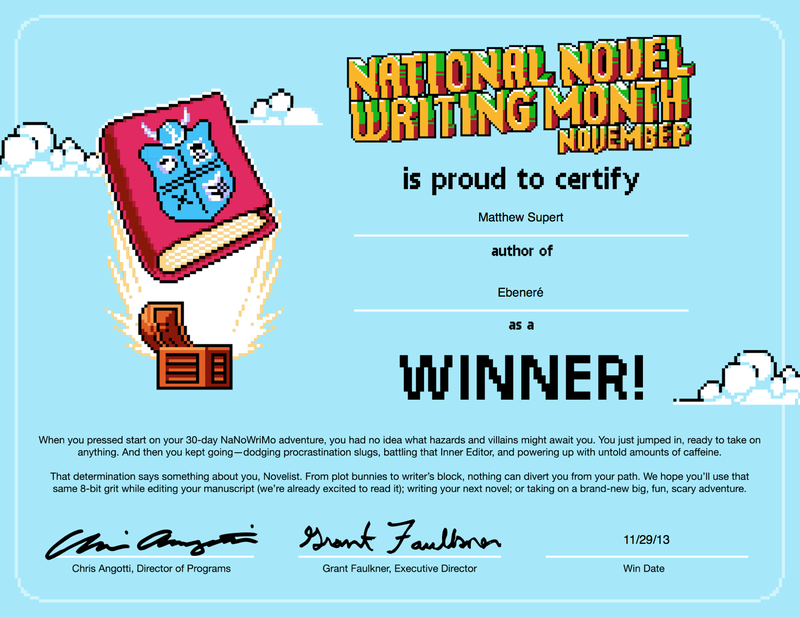 I finished the day today with 50,329 words and I successfully complete Nanowrimo. Now, my novel isn't complete. I feel I still have ~15,000 words left to flesh out some of the story. There are huge plot holes and all sorts of other things that would need to be revised, likes names for about 90% of the characters, but I wrote 50,000 words this month into something that conceivably, could sort of may be look like an actual story.

Hopefully this is just the first part of this journey with this story and I hope to keep going on with it. That being said I am going to take a couple of days off the rest of this weekend to enjoy my victory. 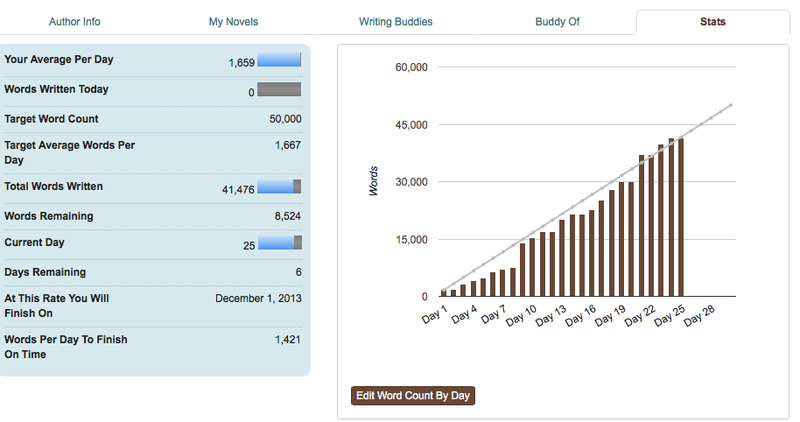 So this past week I thought was pretty difficult. However, as I finished up Sunday night I found myself sitting at 41,476 words completed. That puts me at just under 9,000 words left to complete this week. The ring is within reach. Unfortunately I didn't get any writing done today. Let's make up for that tomorrow.

So this past week was the dreaded and infamous week #2 for Nanowrimo. It is said that most authors really hit a wall during this second week in their novels. I am not sure if it is because they have gotten past the introduction portion of their books and are now in the setup phases or if the realize how big the mountain is that they have to climb in front of them.

Whatever the case is, I have to say that I did find this past week to be pretty difficult. Early in this week I had some real problems trying to get my book going. I found that I have run across a lot more auxiliary characters and locations than I originally anticipated. I spent a good portion of this early part of this week just wracking my brain on how my characters were going to get from point A to point B, or why they cared about risking their lives to do something. I ultimately found a good path for their progression, but not without some turmoil on my end.

One thing that has helped tremendously is talking with someone about my ideas and bouncing the ideas off of them. Getting the words out of my head and asking for advice on how to approach a scene or on how someone would act helped a lot. My wife was that person this week and she actually responded back to me with some really good suggestions.

I finished off this evening with 25,159 words. I am technically a few thousand words behind schedule, but my goal was to be "half way" to 50,000 at the end of week two here and I am proud to say that I accomplished that this evening. I also left my novel in a good spot to allow me to pickup tomorrow with the next section of the story.  Let's hope that this next week goes more smoothly.

So my word count right now is up to 15,257. I have to say that I am pretty impressed with myself. Through the end of this past Friday I was sitting at around 7,000 words. Nanowrimo stated that yesterday was supposed to be a "write in". I was to dedicate as much of the day as I could to just writing.

I probably sat down to write for 5-6 hours and I cranked out another 7,000 words. My story is getting to the point where it is starting to find its stride and open up a bit. Hopefully things continue to be easy here on out.

To close out this check in I will post up another unedited excerpt.