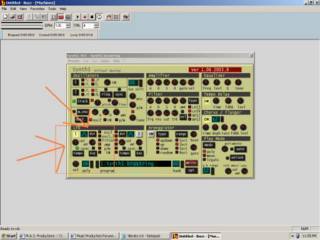 Turoial #3. Vibrato Heres a quick simply way to add vibrato to your synth lines. vibrato is essentailly modulating the volume of a sound. almost all singers do it and most musicians do it as well. when done well it achieves a "wha wha" up and down effect that you hear on sustained notes. vibrato is most commonly used on sustained notes to give them character and movement. a long held note is static is fairly boring. vibrato keeps it intresting although creating vibrato is not that difficult. using it correctly so it achieves a realistic appeal is dificult. tips.
never start a note with vibrato. this sounds un realistic. start instead with no vibrato then using the amount knob on your lfo bring in the vibrato. never end a note with vibrato. always fade the vibrato out completly or partially before ending note. again we want this to sound realistic. if you think of the human voice. u simply cant start and end a note doing a vibrato. your vocal chords dont work that way. the speed of the vibrato is one of the most important things to consider. too fast and it sounds synthetic. too slow and it sounds simply like fading volume control. u want u set your lfo speed to oscilate somewhere with in each quarter note and each eighth note. the exact setting will vary depending on the effect u want and the sound.
setting up vibrato.
For this tut im using synth1. a freeware synth anyone can download. To experiment simply use the default synth1 brastring which is loaded. goto the lfo section, and set it to only 1 lfo is on and assign it to the amp.
for the wavform i reccomend using triangle. if you happen to have pink noise on another synth for a lfo wavform option u might want to use that. pink noise is noise with a variable degree of randomness to its waveform. this randomness creates a much more realistic vibrato sound as it doesnt perfectly oscilate the same everytime. fine a nice tempo or speed setting for your lfo. on the synth1 i have the speed setting to 12 o'clock. play your note. u should hear your vibrato now. to make your vibrato more realsitic automate your lfo amount setting. Play a phrase. At the beginning of your phrase you should have almost no vibrato. then gradually bring the vibrato in. At the end of the phrase u can either cut it or fade it out, but it should never be held over when a phrase ends, b/c u get an unrealistic vibrato sound. remember vibrato should be subtle and should never dominate the sound.
attached is an example from what i did above. for the example i assigned the amount to a knob and continually changed the lfo amount. nothing static.