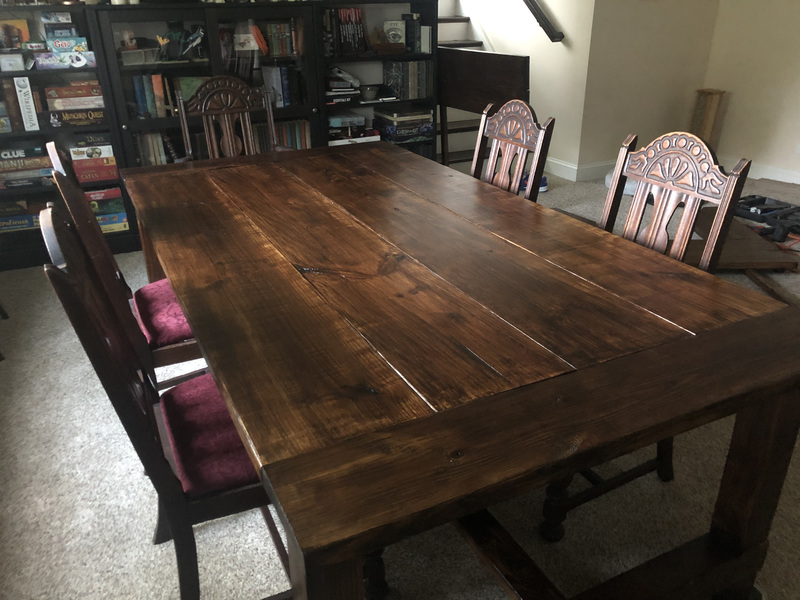 I've had a great spot in my rec room since I have moved into this house for a gaming table, and that has been a project that has been on my radar for the past two years. I thought I was going to get to that project during COVID last year, but that didn't quite come to fruition. With the advent my friends and I getting back together in person this spring, I was finally compelled to get the table built.

There are some really cool gaming tables online that I have seen. Some of them have raised or sunken play areas. Others have built in TV screens or plugs for computers. I looked at all of those as options, but that is not exactly what I wanted to do. My idea from the start was really to try and create the table you would find in that dungy tavern that so many of our RPG adventures start in. So that led me down the path of researching a farm table. My search put me at a blog called Tommy & Ellie, who built a great farm table and served as an excellent starting point for what I wanted to do. I'll also give a shout out to The Spruce Crafts, which is a superb blog for all sorts of FIY and home wood projects.

One of the main things I wanted to accomplish with this table was to create something that was "extra wide". Most kitchen tables top out at around 38" wide, which doesn't leave much space on the table after you factor in your playing map, and player gear. With that in mind I wanted to use 2x12's for the extra width. (Word of note: 2x12's are not 12 inches wide!) 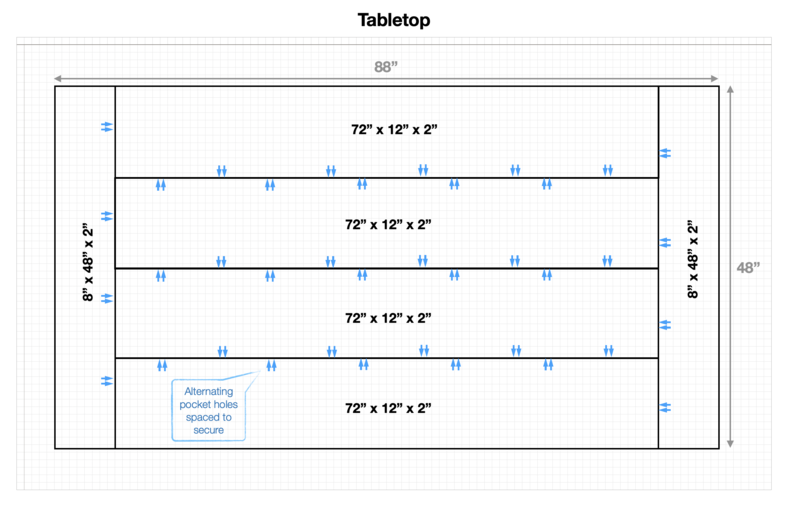 If you are here just for the plans, then here they are. Fairly straight forward table, constructed almost entirely using pocket holes. One word of note I'll add to the plans, and this is something that I sort of knew, but forgot while I constructed this table. The dimensions that lumber is labeled as is not the actual dimensions. So for example, that 2x12 lumber I bought is not actually 2x12. It is closer to 1.75 x 11.75. So while all of the measurements in the plans match the lumber purchased, what you will actually see in reality will be shorter. 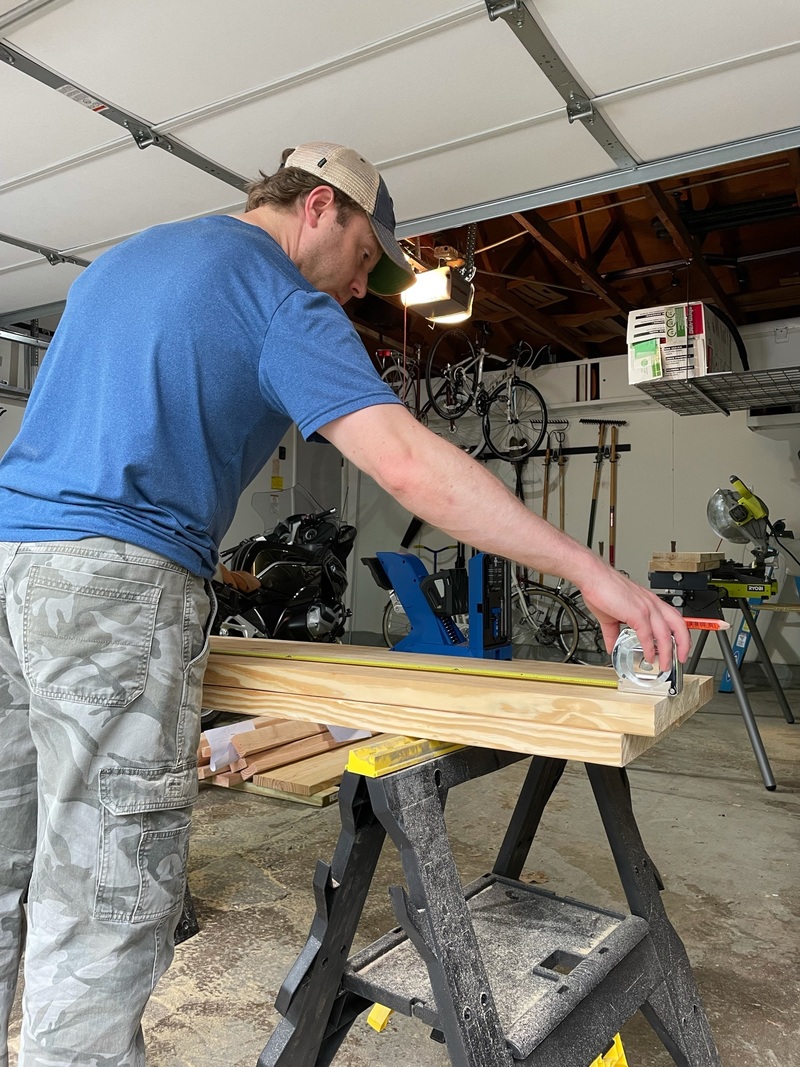 I started construction off with the top, as it was the easiest cuts to make. Before I did that though I ran everything over with a belt sander to get the roughness out of the wood. I was using standard construction grade white pine lumber. Some of it was in better shape than others, but after a good sanding, it came out fine. I like a belt sander here as it was able to really get some wood, and better yet stains or stamp marks, off before working with it. It also made some of the rough edges clean for measurement.

After making the cuts, I ran pocket holes along all of the boards. You can mostly eyeball this, but I started approximately 8" from the edge of the board and just sort of ran what I thought made sense, staggering them as they went.

After cutting the 2x12's I followed up by cutting the end pieces for 2x8's and followed the same process as above and then drilling all of the screws in. I used 2.5" pocket (wood) screws for everything on this project. 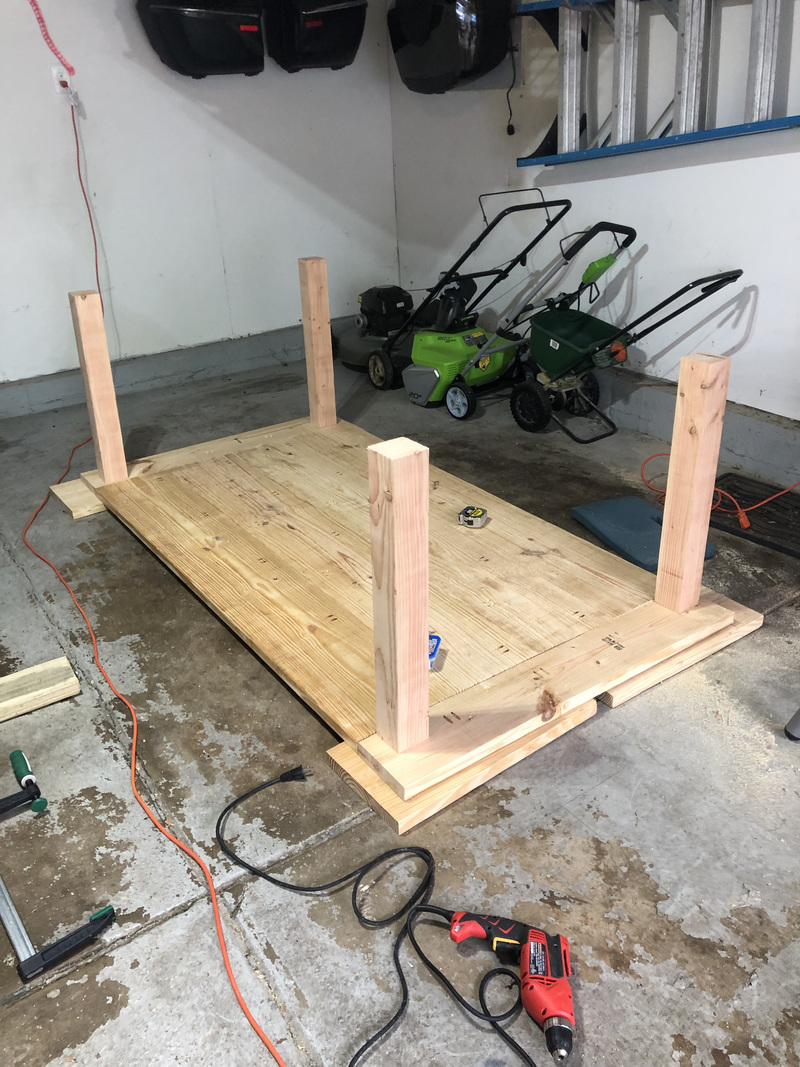 After building the top, I moved on to the base, cutting the legs first. From there I began to work on the lap joint for the stretcher pieces. This process was fairly straight forward, but a bit tedious. I set the lap joint to be 4" above the ground and then used my circular saw set to 3 5/8" to futon both the legs and the stretcher. Take some time to really double check our circular saw's blade depth here and don't do another other cuts, as it will be very difficult to get the same depth again. Once I made multiple passes with the saw, I just chiseled the pieces out and then hand sanded it to a reasonable smoothness.

Download video_1_19aa625562484453ae67e3c415328df2.mp4
*Trouble: This is one part of the process where I did run into some trouble. It was very difficult to make the lap joints perfectly square with a circular saw. This could be tightened up with a table saw for sure, but isn't necessary. 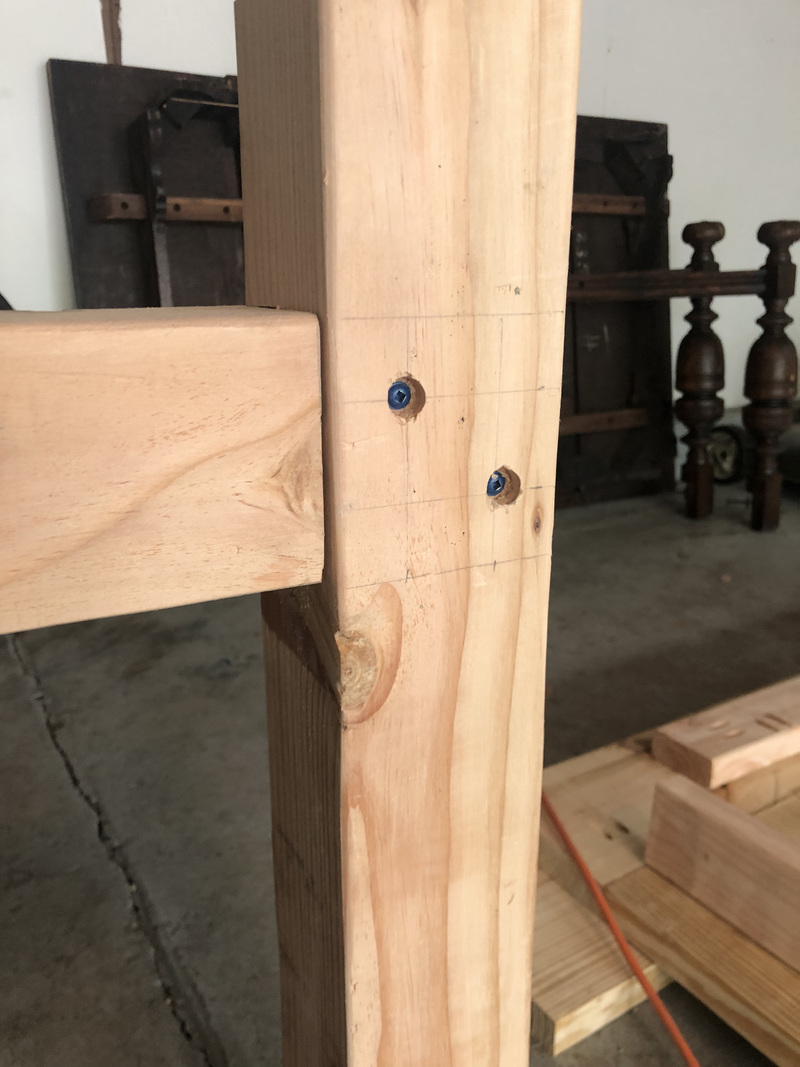 To attach everything together I sunk the same 2.5" wood screws by first drilling a 1/2" deep hole with a Forstener bit. You can pick this up fairly reasonably, but which bit you will use may depending upon the size of your screw heads. I believe mine was 5/8".

After that I clamped my 2x4 stretcher in place and screw that in from the underside using the same process. 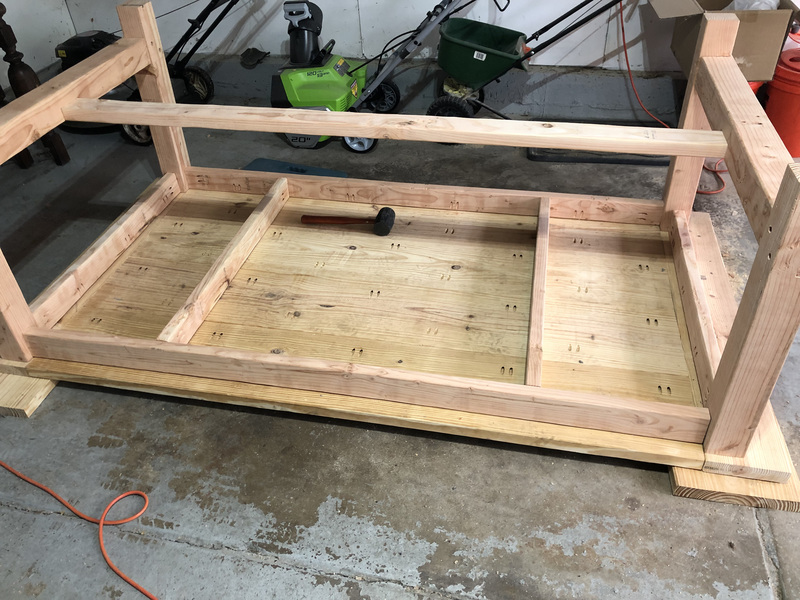 After that was done I flipped everything back over and then screwed in the top braces, using the same concept with the pocket screws. 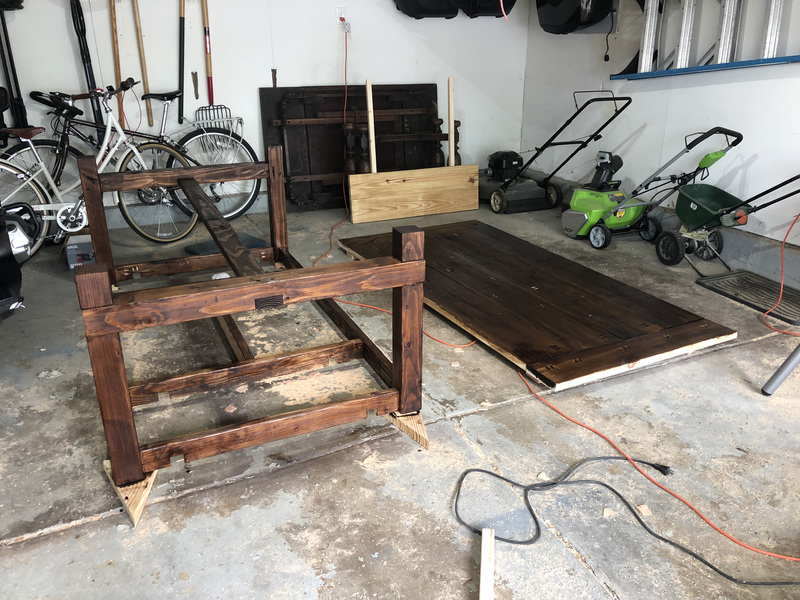 Once everything was screwed up, I went and stained it. I decided to use Minwax Polyshade in Mission Oak for this project. In retrospect, I am not sure if I would recommend the Polyshade again. It actually worked out for me ok, but the brush did get pretty "gummy" several times and I had to clean it with mineral spirts. I only needed to use one coat of Polyshade opposed to the 2+ coats for traditional stain, so it sort of worked out in the end, but your mileage may vary depending upon your climate or humidity.
After coat of poly shade I burnished the surface with "000" grade steal wool. The directions said to apply a second coat, but one of my test pieces had way too dark of a finish so I ended up purchasing some standard polyurethane in the satin finish to apply the final two coats. Applied one of those, burnished once again and then applied a very thing final coat
*Trouble: Ran into some trouble staining with those sunken screws I talked about earlier. The Polyshade kept pooling in those holes and I had a couple of instances of it running later, leaving a streak. Not a big deal since those are on the inside of the leg, but something to keep an eye on. 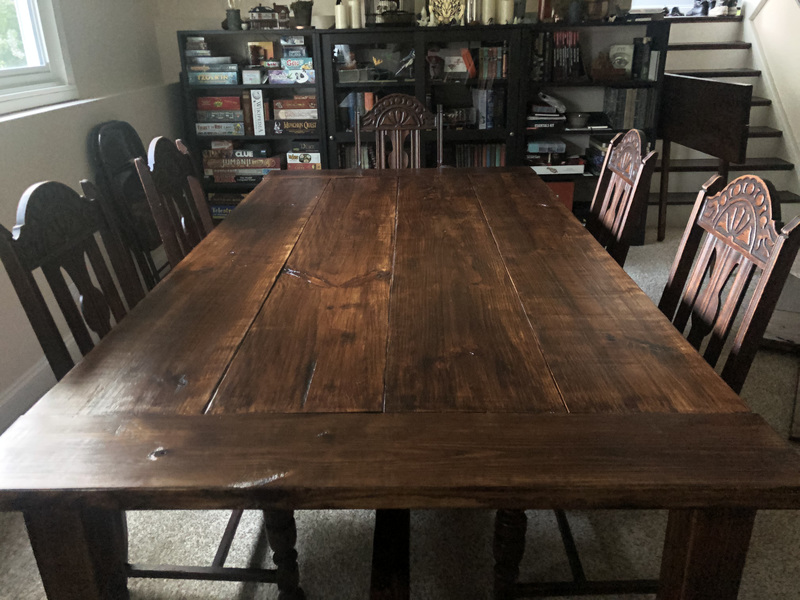 You can see above the difference the polyurethane really did to the final product.

So one part of this project that ended up being a total failure was the construction of some end leafs. I had some extra 2x8 pieces and I decided to purchase some 2x2 pieces to try and construct some removable end pieces. I thought one U-shaped piece would be great for the DM. I ended up cutting out a 2x2 hole in all of the top stretcher pieces on the table.

Unfortunately that part of the project was a hard failure. Not only were the 2x2 pieces way to hard to get in and out of the table, but the end pieces were way to heavy and moved too much. Perhaps if I used a harder wood it would've worked out, but I decided to scrap that concept. 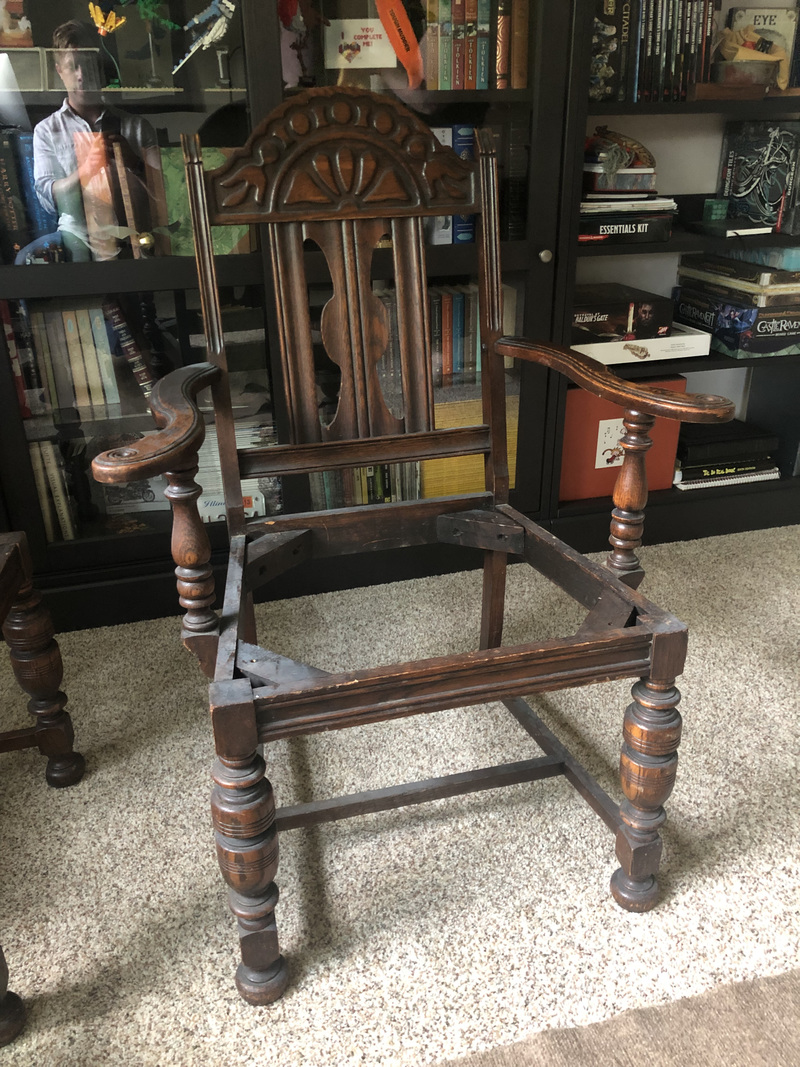 You may have also noticed the chairs in some of the photos. I obviously did not make those, but instead purchased them on Craigslist. We made a quick trip to Michael's to purchase some fabric and re-wrapped those in an afternoon.  Really easy and effective project.