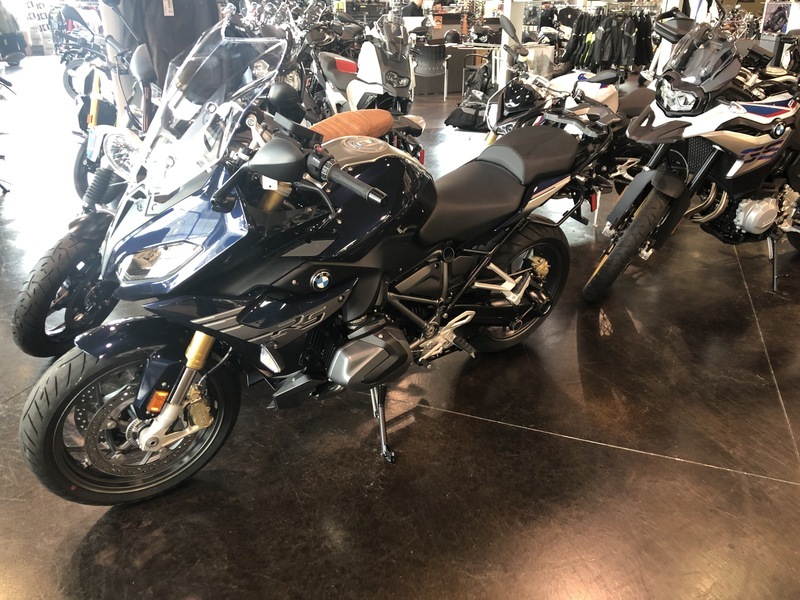 Well, I think it may be time for a new motorcycle. I have loved my 2012 R 1200R for the past seven years, traveled all over the U.S and Canada with it. The bike has served me really well, but I have noticed over the past two years that I get pain in my neck, shoulders and butt on the longer rides that I am doing with it. Especially on these really long weekly trips or days over 300 miles, I get a sharp pain in between my shoulder blades, which shows up as a sharp sting when I roll my shoulders a particular way. That shouldn't be happening and I shouldn't ignore that either.

I was able to power through it up until this year, when all of a sudden this spring I am getting the discomfort on even shorter daily rides. Saturday and Sunday rides are getting to the point now where my back is starting to hurt on the bike. I did a ride with friends up to SW Wisconsin and New Glarus last weekend. It was a long ride to be sure, but it was only one day and when I got home, I was very uncomfortable.  We have our annual summer trip coming up here in a couple of weeks and the thought of riding 300+ mile days for over a week really doesn't sound pleasant at this point on my R 1200R. Perhaps I am just getting old, but I feel it is finally time to change up the bike.

This weekend I happened to test ride a bunch of bikes over at Motoworks Chicago and Windy City Cycles. Now, I have had my eye on the R 1250RS for a while, and I heard that it was going to be coming out sometime this fall. That being said, people have told me that I should check out the RT as well, since some consider it to be a "sports touring" bike. Personally, I think it has way to much fairing to be considered a "sport tourer", but it is well known as a great bike.

The first test ride was Saturday over at Motoworks. They were holding a test ride day and they were offering the new R 1250RT for a test ride. For those who don't know, Motoworks is located in Chicago, so the riding environment was perhaps not the most ideal for testing a touring bike. We got out on the I-55 for a bit, but most of the test ride took place on local city streets. All that being said, I actually was surprised by how much I liked the bike.

When I first sat on it, I immediately noticed how heavy it was. It is close to 600 lbs and when it is sitting at a standstill on the curb, you can totally feel all of that weight. The seat height is quite a bit lower than my existing R 1200R. The riding position immediately felt very comfortable. My feet were placed just a bit in front of my bum and the arm position was definitely more upright and relaxed. I could definitely see myself putting miles on with this bike.

So, how did the bike ride on the road? I have to say I was actually quite surprised at how nimble it felt on the city streets. I was able to make agile turns quite easily and the foot peg positioning allowed me to still standup on the bike when going over speed tables. The weight of the bike almost disappeared while it was moving.

Now, that being said, there was still a ton of bike there. Having all of that fairing restricting my field of vision felt "weird". Perhaps that would disappear with time. The fairing almost presented too much wind protection in my opinion. Even in it's lowest position, most of the wind was blocked off my helmet and the side fairings kept all of the wind off my legs. In the 90 degree heat of Chicago pavement, I was actually burning up on the bike, even when moving at a pretty good pace of 40-50 mph.

Overall, I surprisingly liked what I rode, but I wasn't in love with it yet. I left Motoworks, stating that I might follow up with them later this week.

On a side note, let me just put a plug out to the Motoworks staff and team. This was my first time at this dealership and I came away super impressed. Multiple staff members greeted me warmly as I walked through the door. They gave me a tour of the whole building while I was waiting for the test ride and I even got into a conversation with the BMW lead tech talking engines. The place also just oozes style, setup in an old warehouse. It  has a very city, almost hipster feel. The staff seemed like they really got along with each other and the atmosphere was great. They were grilling burgers (which they apparently do every Saturday) and they invited me to a burger, where I ate at a picnic table with other staff members and customers. We had a great conversation about bikes. It was a really welcoming feeling and the most welcoming dealer I have ever encountered. It was unreal.

While mulling over my RT ride on Sunday, I noticed that Windy City Cycles had just listed the new R 1250RS on their website, indicating they had two in stock. Now, I have been waiting to test ride this bike for a long time. The talk was that the riding position was super comfortable while offering the weekend sportiness that I felt I wanted out of a bike. The one thing I have always loved about my 1200R is that I can strip all of the luggage off it for a lean, weekend ripper, while at the same time, loading it back up for longer trips.

I emailed Windy City and they stated they were open on Monday, so I shot on over there. So the RS, flat out looks amazing. I test road the Black model, but on the show floor was the Metallic Blue model, which just oozed good looks. The sales rep gave me a great overview of the bike and explained to me how the BMW Shift Cam quick clutch system works. The RT I test rode had it, but I wasn't sure how to use it, so I didn't test it out.

Impressions on the RS? Well, the bike is super sporty. In fact it is too sporty for me. The riding position is even more aggressive than my R and I was able to tell within five minutes that this probably wasn't going to be the bike for me. That being said, the bike rides amazing. That aggressive seating position does make it a great bike for getting into the turns on. The quick shift system is absolutely fantastic and what basically sold me completely on the new 1250 engines. It's the main reason I don't even want to consider a used bike. In short, if you have the engine revving above 4,000 RPM or so, you can shift the gears up or down without pulling the clutch. This allows you to accelerate incredibly fast from a stop. It felt so smooth. It takes some getting used to though, because you can't roll off the throttle like your muscle memory wants you to. You just need to keep the throttle buried when you shift.

The RS also had the new TFT display, which the RT does not have. The TFT display was gorgeous. I couldn't believe how crisp it was even in direct sunlight. It could show all of the bike's details. Just superb.

So I ended the ride on the RS disappointed, but at least more educated. While talking with the rep, I asked if I could also get on a GS while I was there. I knew that the GS would over a more upright seating position.

So I hopped onto a 1250GS with the lowered seat option. Immediately the seat height was similar to my R, so that felt comfortable. Once I got on the road though, I knew immediately that the GS wasn't for me. While the riding position was definitely more upright, the handlebar position was much wider and higher. My hands were near shoulder height. The handlebars felt too wide for road riding. You could tell they were designed for offload stability. The suspension system also never felt right for me on the road either. While I could get the bike to lean into corners easily enough, it never felt stable there for me. It felt like it wanted to stand back up rather than settle into the corner.

I quickly could tell that the GS just wasn't going to me the right bike for me. Also, let's note that the luggage on the GS is not included and would total about $2,800 - $4,300 additional, depending on whether I got the plastic or steel cases. That is a huge additional price. Ending that test ride I told the staff that I really need to take some time to think over the bikes. None of them hit the sweet spot like I was hoping.

I'll also note that the sales staff at Windy City were also superb. They spent probably two hours with me talking over the bikes.

So where does that leave me? Well, you may have guessed that I may end up with the RT. As I noted at the beginning, I immediately came away from the bike likening it. Question is, did I love it? I just don't know. Megan made a good point that i shouldn't expect the same things from a different type of bike. My R isn't a touring bike, as much as I have forced it to be one, and the RT is. There are some trade offs regardless of which way you go with that.

I think I'll be making a decision this weekend though. I have that big trip out west coming up on the 17th.