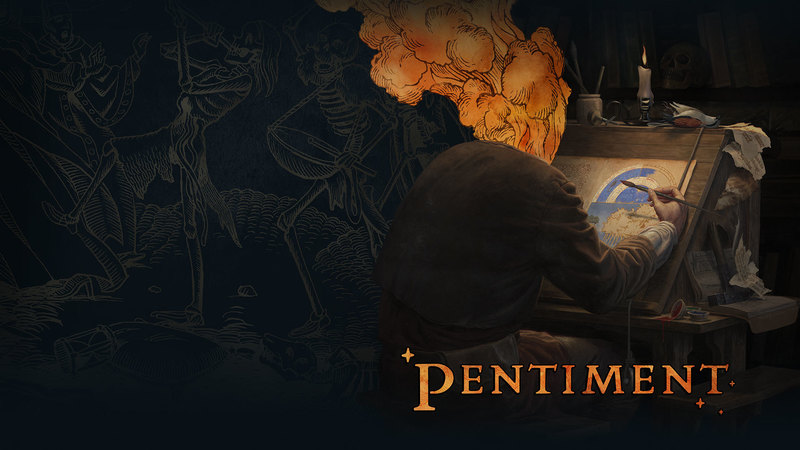 This past week I have been knocked out of commission due to a nasty head cold. I unfortunately have never been able to "nap" so I have be stuck on the couch, cleaning up work emails and trying to find something else to pass the time. Too tired to read or engage my brain in any real creative activity I decided to give the recent Gamepass release Pentiment a go, and boy did it hit the right spot at the right time.

Pentiment is a text based murder mystery game focused around 16th century Bavaria, the Catholic Church, and the Holy Roman Empire. The adventure takes place in the town of Tassing where you have to first investigate a murder at the local abbey. The murder mystery has you as the main character going around the town, looking for clues and interviewing people in the town. All standard "your choice affects the world and people" stuff we have seen in many games.

What really sets Pentiment apart though is the atmosphere. First the game's art style is a wonderful hand drawn and there is almost no music in the game, with the exception of two notable instances in my play through. It came to be incredibly relaxing while laying on the couch sick.

The other thing that really caught me about this game is how it built this sense of family and community. The game is really about the people and the families of Tassing. There are three acts in the game that take place over twenty years and through each act you see families grow, some members pass away, and others get married to each other. It was touching and it really grounded me to the characters to see where they have come and where they were going. Finding out that someone from the first act had passed away really struck me emotionally as I needed to delicately navigate how to inquire about the circumstances of what happened the seven years I was gone.

This was the late 1500's after all and times were tough. Political and religious struggle was bounded by the plague and class warfare and that is reflected in this game. It all came together though in the third act as the game culminates on Christmas Eve. All of your choices an all of the lives of the characters in the game come together on the Christmas Eve celebration at the local inn. All of the townspeople are there and there is this brilliant moment of cultural community that is brought together that just really touched me from a storytelling perspective. That pure sense of community and despite all of the hardships and tragedy that have occurred to the characters in this game, they all soldiered through it together, as a community.

The game can be a bit hard though to get invested in, especially if you aren't prepared for the amount of text you need to parse through. Additionally, there is a beautiful element many of the character's text in the game is different based upon their profession. For example, the monks at the monastery have text bubbles in a gothic font. The local printer has his family's text in a print font. This is a great touch, but can be a bit hard to read at times. Thankfully, there is a "simple font" option for those who want to turn it on, but the game does lose a bit of charm there.

Also, the other minor fault in the narrative flow is that the game doesn't always give you a good indication of how much interaction and time you have between the scenes. There were multiple instances where I could have interviewed more people, but didn't realize my current interaction was going to progress forward the clock. That was not telegraphed very well early on.

Overall though, such a wonderful and touching game and I think I might play it again to see how the story changes with different dialog choices and different interactions. Check it out if you are looking for a nice, slow paced game.