Alright we all know and have heard about compressing your tracks. Compressors generally create a smoother balence between levels in your track and create headroom. Compressors though can be used more then just on mastering channels. If used creatively as effects you can achieve fantastic textures to your sounds. This is a basic tutorial regarding hard compression on percusion tracks. Hard compression is used mainly in two genres respectively.1. IDM music. classic examples are most of bjork's tracks.2. techno, and bouncy hard house.Ill try to explain some of the settings and some tips on how to arrange sample for either of these types of styles. First lets define a compressor.
Compressor is a dynamic processing effect used to reduce dynamics range.
Basically it is an automatic gain control device that will reduce the signallevel when it passes a specific threshold level , and leaving it unchanged if the signal is below the threshold level.Compressors are one of the most important consideration within a mixand have the same level of approach as an EQ might have since a properuse of a Compressor can make the small/big difference between an amateur unpolished production, to a finished & professional sounding mix !This definition wastaken from the help file of the BGtech compressor, my favorite and the one used in these tutorials.Lets first begin with the dance hard compression. hard compression with dance is great because you can create a very dead type of sound with the patterns.
with the dance hard compression you want to start out first with a pattern.when creating patterns with hard compression you cant sequence 2 wave files that have high thresholds to be triggered at the same time in a pattern. If this occurs then the compressor will compress them both and neither will be able to stand out in the mix.
ideally what you want to do is sequence your samples in such a way that every 8th note (or 16th note if you want) will have a sample in it being triggered. this creates 2 things from this. 1. You wont have gaps of sound in your pattern, if you do the compressor will emphasize them making them sound all the more "open" 2. the continuous sound with the compressor will create greater contrast as a new sound is triggered. The compressor makes makes the last sound still going seem to "disappear" or cut in a sense (due to it compressing the new threshold) creating a crisper tighter feel. If you need to fill in sapces create ghost hits. These are sanre hi-hat hits that have a very hi-attack rate, and low volume. They are commly used in Dnb and are there not to be heard, but rather to simply fill in dead sapce, create some sound for it.
here's an example of a dance pattern i sequenced out for one of my tracks. Hopefully u can make it out with tracker style sequencing. 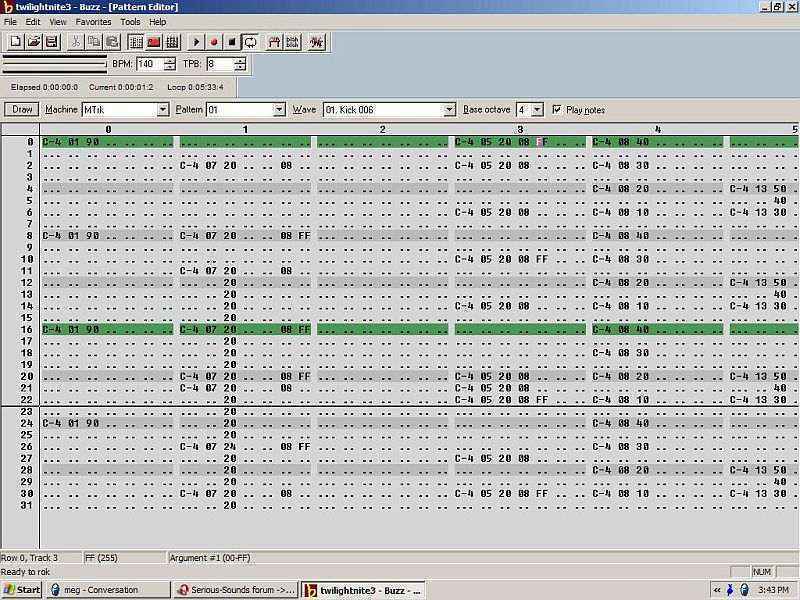 if you look yo will see that on track "0" i have kicktrack "5" contains snare hits. both kicks snares and hi-hats tend to have very high threshold levels. so I sequenced all of the snares to not hit at the same time on the kick.
the other samples I nthe other tracks are shakers and some low toned beats. These have lower threshold levels and therfor I could put them on with the other stuff. Naturally with the compression on they are pushed into the background of the pattern.
attached is the audio sample of this pattern un compressed. as you can see right now it doesn't sound all that spectacularNow it is time to add the compression to the track. The parts. for the real hard compressed sound you want to set your ratio high and the knee to hard. the parts you should play around wit hare the threshold, attack and release times.the threshold will determine at what threshold the compressor will kick in. And the attack relase determine the times for how long it takes for the compression to start and stop once the threshold has been passed.
here is the settings I used for this percusion line. 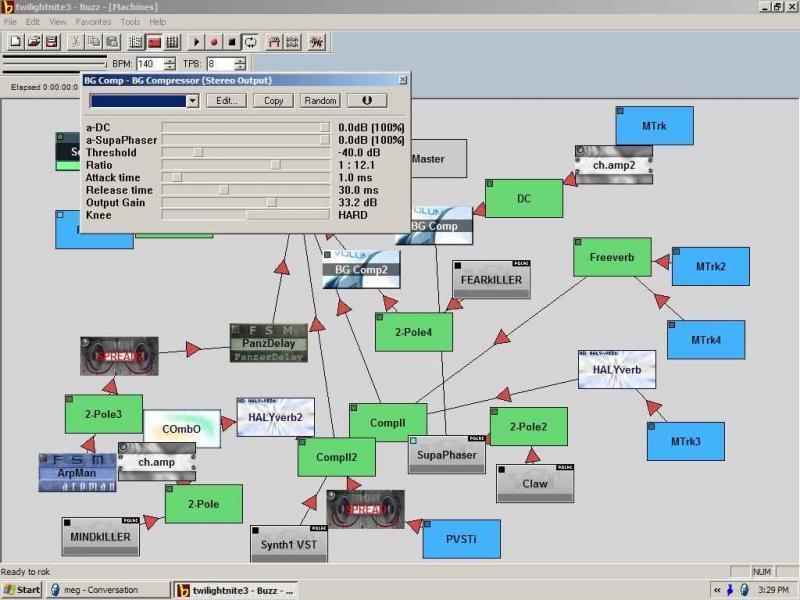 on this particular pattern I decided to go with a slightly higher attack for the compression b/c I wanted to retain the thud that the kick gives off, but in turn set the release hi so when the sounds go below the threshold the y are still slitghly compressed still. This creates for a dead, but bouncy sorta fee as the compression "waves" between on and off with the kicks of the pattern
attached is what the pattern soudns like compressed.next we move on to the IDM feel for the hard compression. Much of the same rule apply here as in the dance one.
one important thing though regarding the samples must be done though. To achieve the idm feel you should take your samples into a wav editor and make all the ends of them fade out very quickly. you don't want to cut the decays off, but you want them to stop very suddenly. this crates thud, and clicky type sounds suitable for IDM percusion.
Again for the IDM pattern sequence things out so as high threshold sounds don't trigger at the same time.here is a very simple pattern. 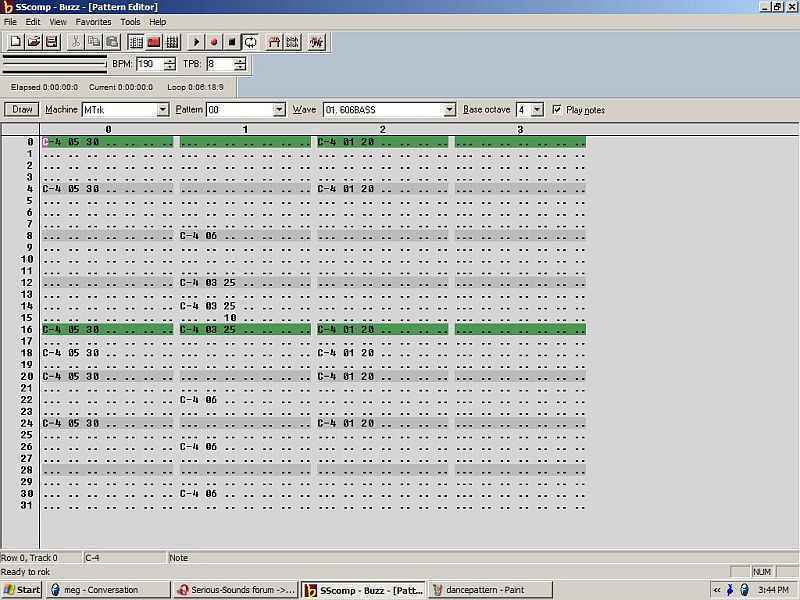 the main goal for the IDM patterns however is not to focus on the bass sounds, but to instead focus on the higher sounds, the snares, claps hi-hats.
attached is the uncompressed sounds. as you can hear the deepness of the bass completely overshadows the higher sounds.the goal of the compression for IDM drums is to have very tight quick sounds hits. they also should sound very dry. 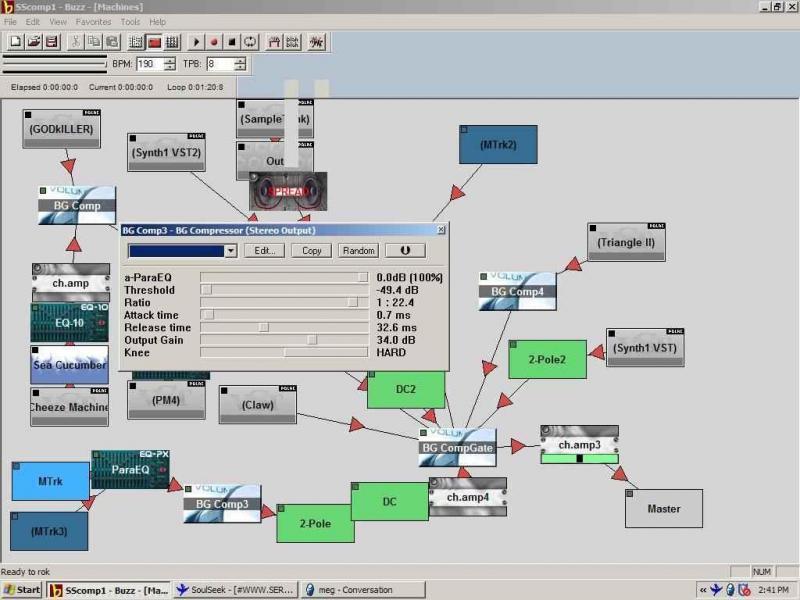 with this sample you want to set your attack settings to be very fast, since what we want is not to emphasize the bass but rather the other sounds. So the kicks are heavily compressed and quickly. the release should be fairly high since you don't want the compression to turn off as other sounds are brought in and the thrshold triggering sounds is no longer playing.
the ratio for this compression should be very high!!! As yo you see I practically maxed out my compressor. The part the only allows your real freedom to play and tweak alot is the threshold level for these sounds. The threshold level if you play with it will determine how sounds are compressed. in the case of this sample I set it so most of the kicks are compressed out leaving only a sharp thud type sound.
attached is the result of the very very yhard compression set for the pattern

Well its election day, did you all vote? I did via absentee ballot for John Kerry. Not my ideal choice but he ain't Bush so I suppose I fall into that camp. In other crazy thoughts some bastard pulled the fire alarm in my building last night at 4:30 am. We all had to evacuate and stand in the rain for an hour. I'd love to deck the guy/girl who did that. I did have some profound thought which I was planning on posting here, but to be quite honest I totally forgot what it is. I really should write these things down. I suppose ill just post another audio tutorial or something. yeah.....Ill do that. 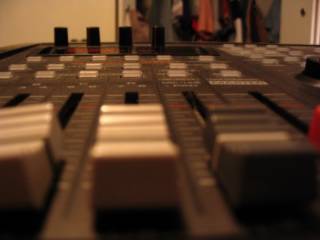 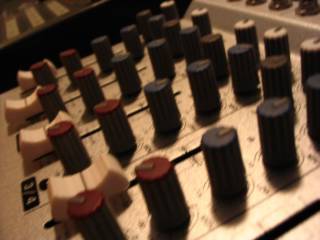 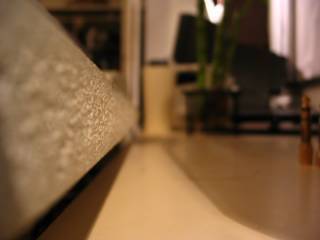 Playing around with my camera. Took some close ups of my gear. ohh yes.