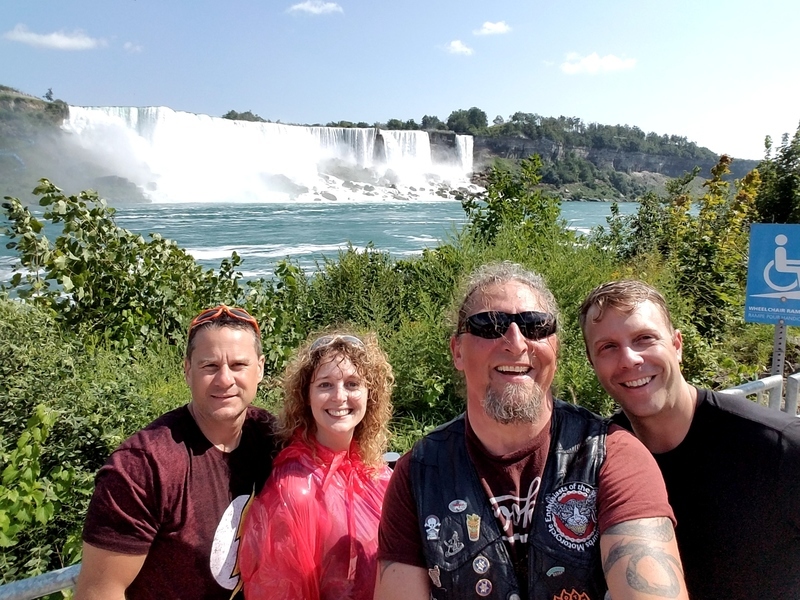 The first day of leaving Chicago for any trip is always a drag. The midwest here is boring highway for hundreds of miles in almost any direction. The first leg of our trip was to get from Chicago to Port Huron 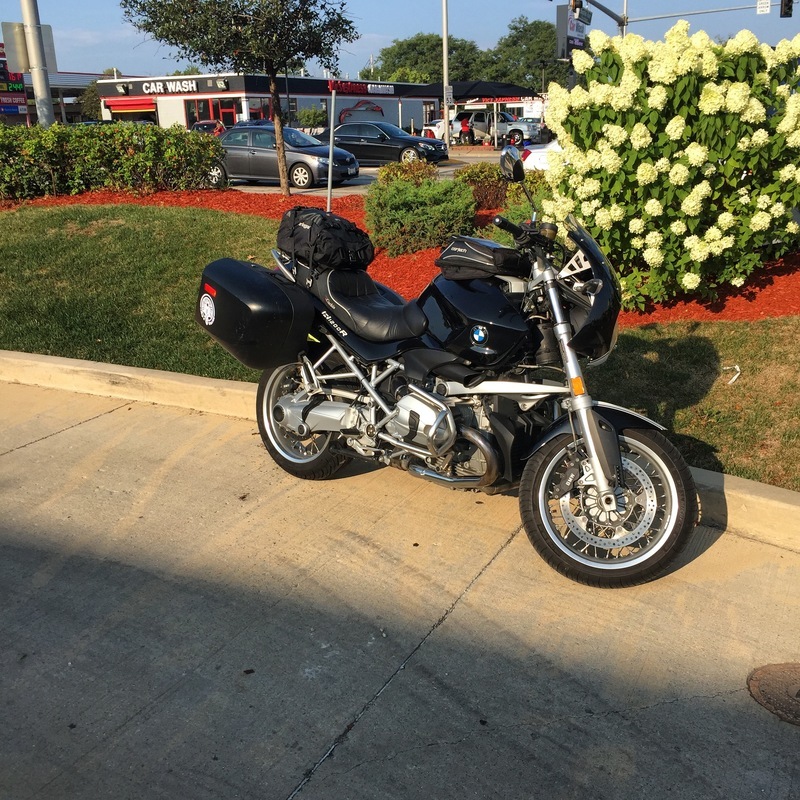 Out first stop was near Kalamazoo Michigan for lunch at a place called "The Crow's Nest". It was a great restaurant with hummus and some vegan options. You can see in the photo above that Doug (and Peter) ordered a burger that had sausage gravy on top and biscuits for the buns. It was a pretty cool and intense dish.

Day 2 - Crossing the Border into Canada 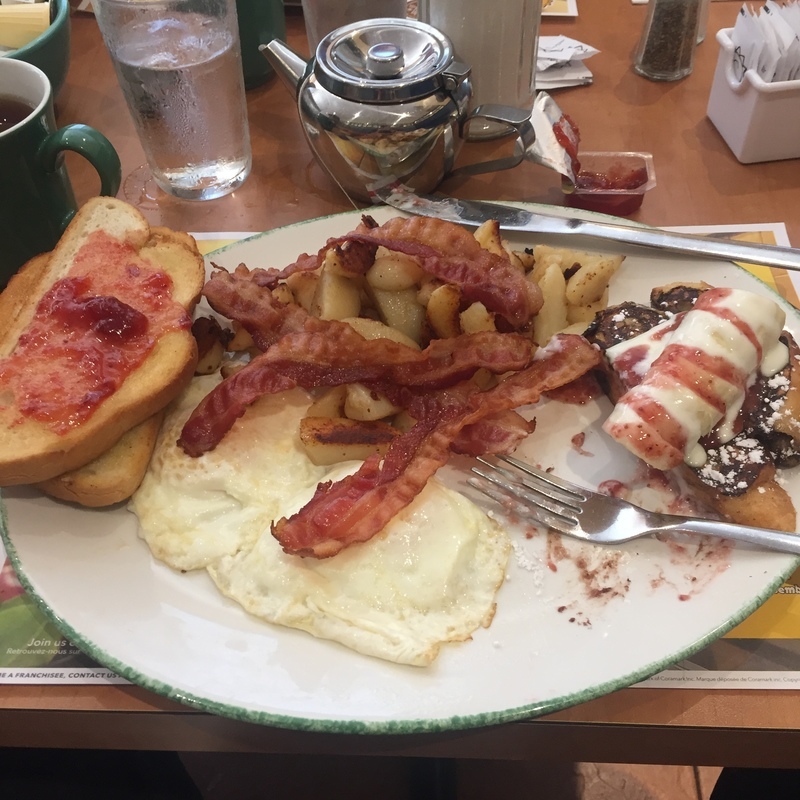 Day two was a quick cross of the border into Canada and then breakfast in London, Ontario with some of Pete's friends. A great breakfast.

We arrived at Niagara Falls around the middle of the afternoon. I was sort of amazed at how touristy the whole thing was. It was like a mix of Wisconsin Dells meets Las Vegas. 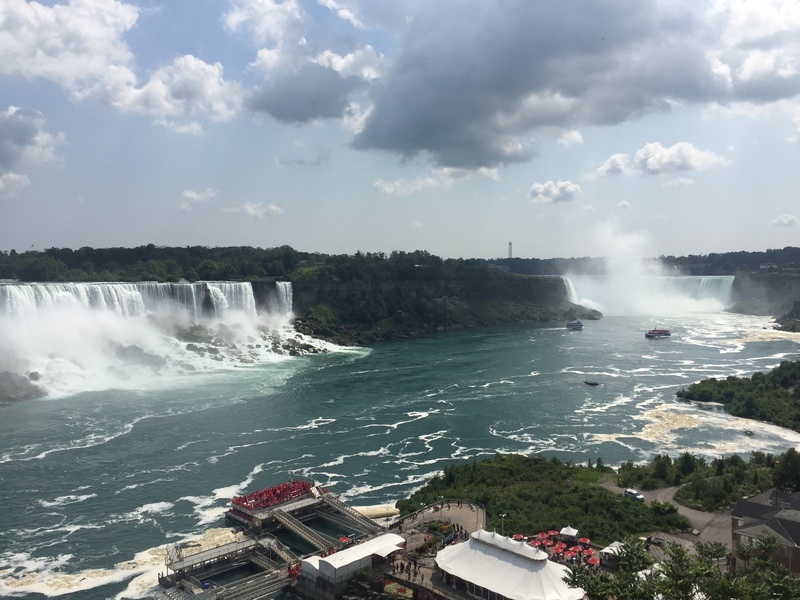 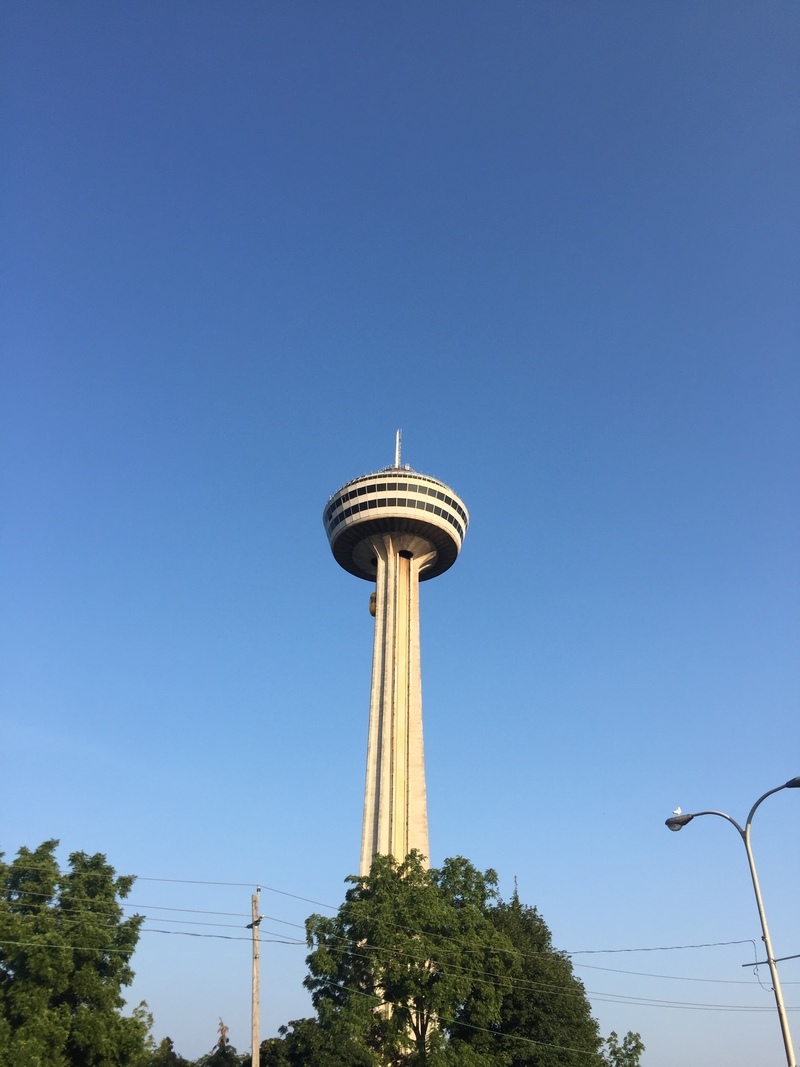 Dinner that evening was in the Skylon Tower which offered us a wonderful view of the falls. After dinner we went for a walk up to the falls.

The falls though are really what made the whole stop worthwhile. 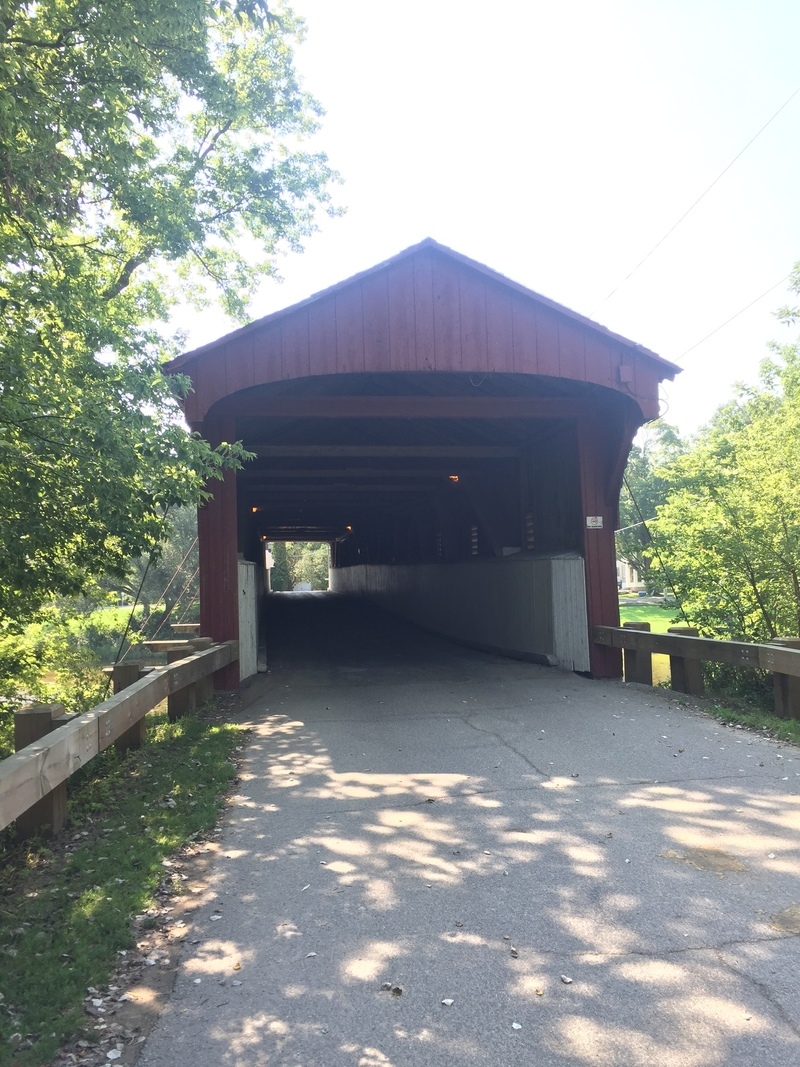 Day three was going to be our first kick off into some real riding. The first half of the day was honestly pretty rough.  I have come to discover that most of Ontario is the same boring flat roads that we have in Illinois. In truth you would not be able to tell the difference between here and there if I gave you a generic photo of the countryside. 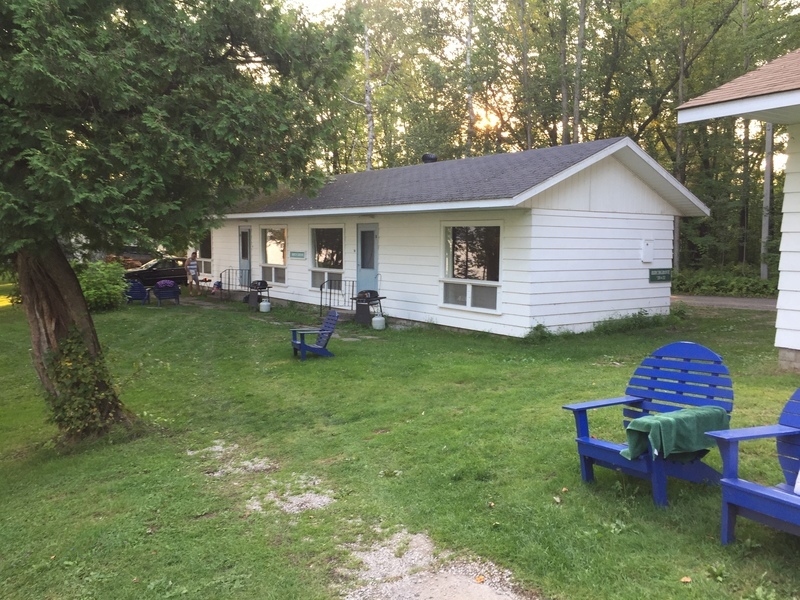 Download IMG_3439.MOV
The ride did thankfully open up on CR-35, which ended up being a very pretty country ride through the Highlands. A few miles of road construction slowed us down, but ultimately lead to a pleasant ride finally.
Our day ended at the quaint (but not so great) Tally Ho Inn. Don't let this this picturesque inn fool you. It was unfortunately not very good and full of bugs (roaches according to some in our group). We did have a great dinner across the street at a place called Muskoka on the Rocks.

Day 4 - Algonquin Provincial Park, a ton of rain and Rigaud 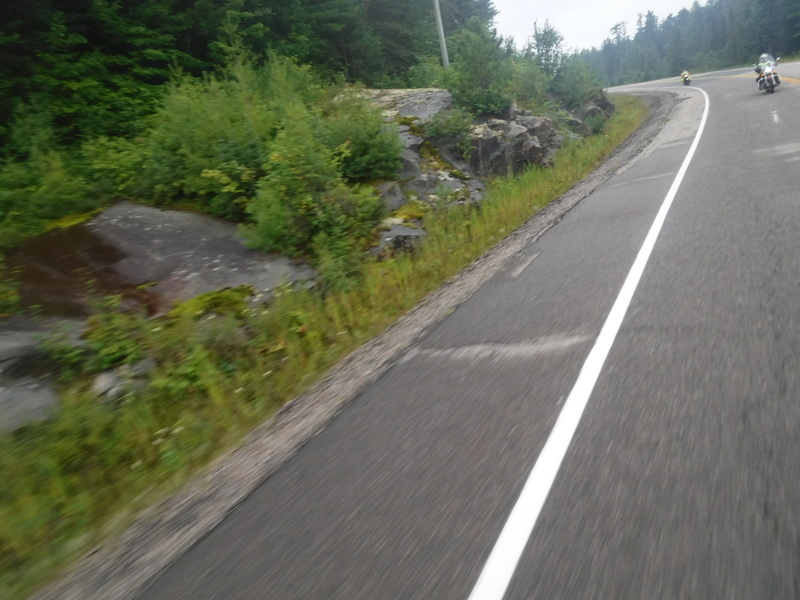 Day 4 was our opportunity to really explore some fun roads for the first time. We started out the day riding through the Algonquin Provincial Park, which was truly fantastic. As you can see from the photos above, we had rain on our tails which did ultimately catch up to us. 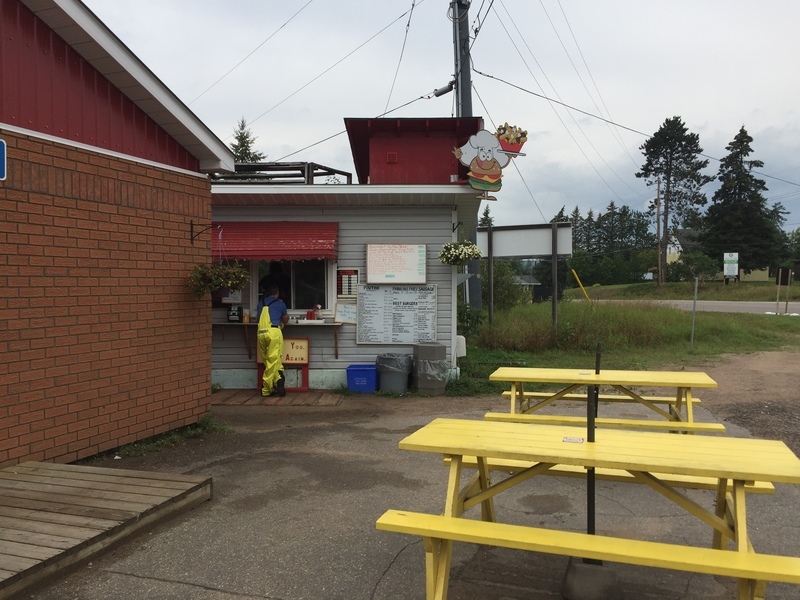 That rain as I mentioned did catch up with us after lunch. We stopped in Barry's Bay at a place called Charlie D's for lunch. Poutine was o the menu. They were out of power due to a storm that rolled through a few hours earlier. It began to rain while we were there, and we quickly decided to get back on the road to try and beat the weather. Well, we didn't beat the weather. In fact we ended up riding through the hardest storm I have ever been in. It was a hard rain that soaked through all of my water proof gear.
Download IMG_3456.MOV
Download IMG_3455.MOV
We rolled into the town of Riguad late that evening wet and tired. Our hotel the Auberge Du Mont Rigaud Inn was a welcome sight. Dry and extremely pleasant, we unloaded our gear and went to get some dinner in the town just at the bottom of the hill. In fact, this was probably my favorite hotel of the trip and the town itself was also extremely quaint and pleasant. All agreed that it would have been nice to spend some more time here.
Our dinner was an a fantastic little Italian restaurant in Riguad. There were just us and some locals in the restaurant. The owner was a super nice woman and we had a great meal there. 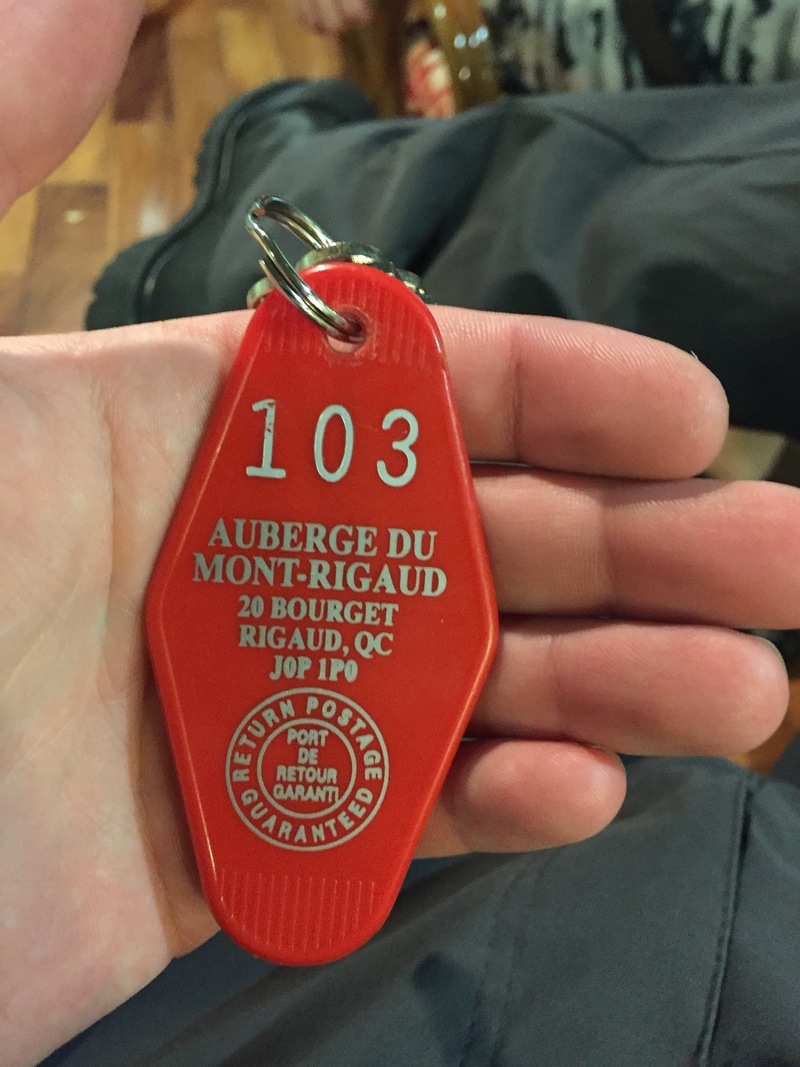 The hotel itself used to be a dormitory for monks/priests for the monastery that used to exist further up on the hill. There is a beautiful outdoor chapel that some other people staying at the inn suggested we check out before we leave and I am very glad we did. It was gorgeous. Breakfast that morning was crepes made by the caretaker. 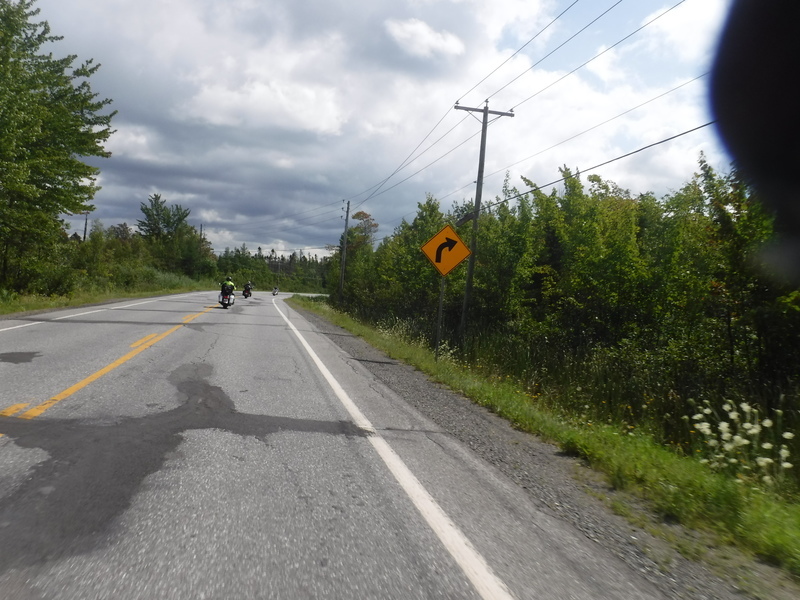 After a great breakfast in Riguad we were off on the road again. We decided to long haul on the highway in the morning to make some good ground before we hopped onto some back roads leading up to lunch. Lunch was at Ailleurs Restaurant, which turned out to be another winner for food. We had a great outdoor seating area on the patio and they had an excellent selection of beers on the menu. I had mushroom soup and some pasta with a cesar salad.

We were very close to the US border at this point, just 15 miles or so away from Stanhope. 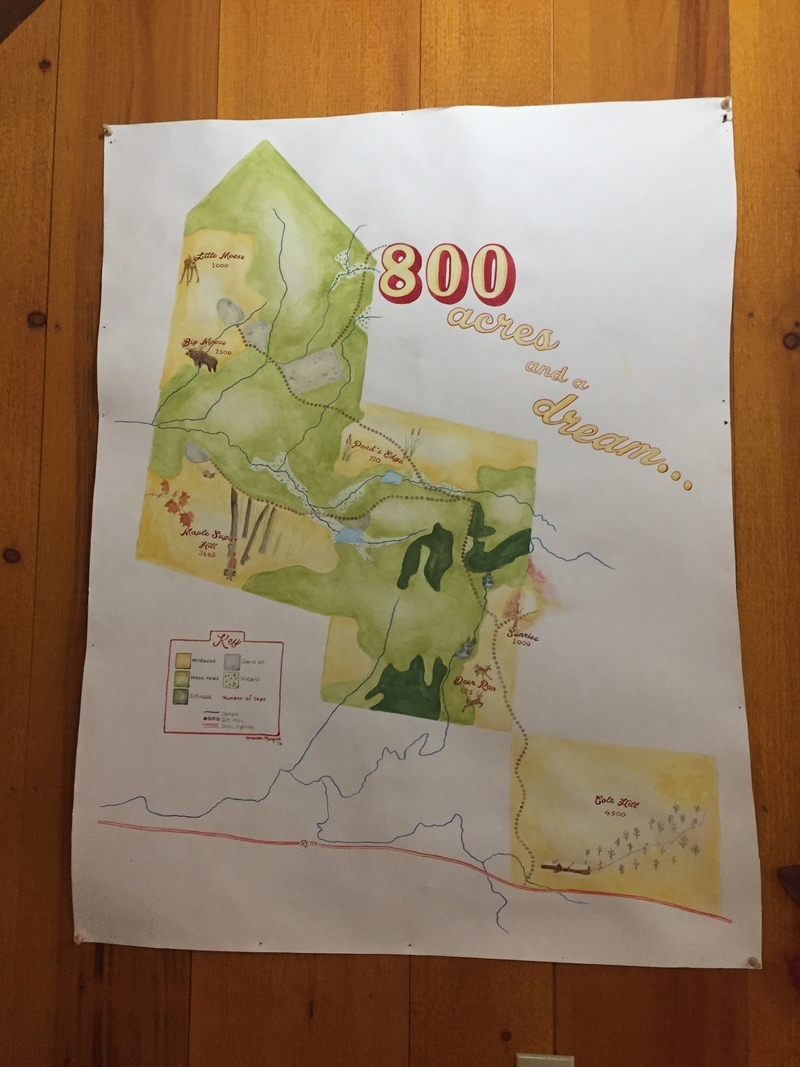 Back in the US

Once we crossed back into the US we found ourselves in Vermont. Still 200+ miles away from our ultimate destination. We made a quick stop at April's Maple, which is a maple syrup shop. They own 800 acres of trees, so we of course bought some maple syrup.

We then took some amazing country roads to our next stop at the World Trailer sign. It is a interesting little sign owned by some private homeowners on the road. We were not the only travelers to stop at the sign while we were there, and we did sign the guestbook. 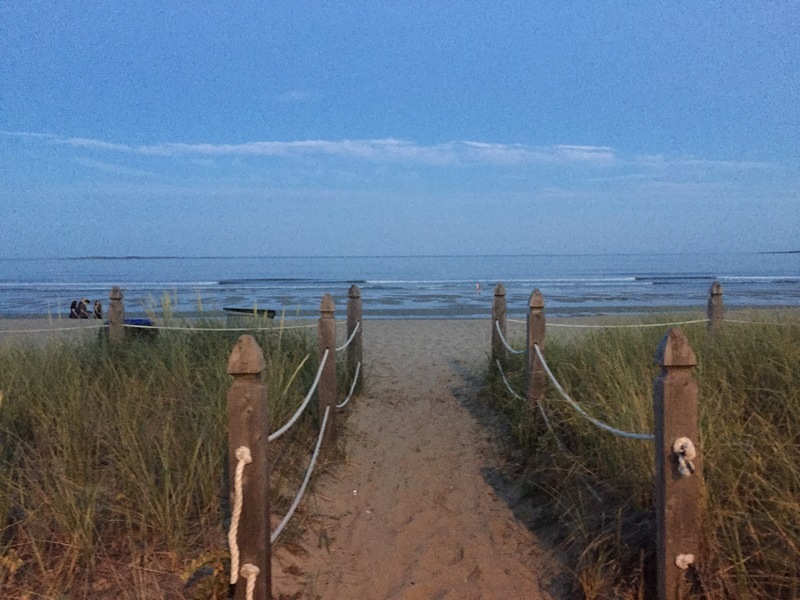 We finally arrived at Old Orchard Beach around 7:00 pm or so. We were all tired. Our hotel was the Skylark Inn, which turned out to be another fantastic place to stay and someplace I would love to go back to at some point. It was right on the beach.

We walked the beach towards the pier to eat dinner at Surf 6 Ocean Grille. We got our lobster and soups and had a great evening of it. 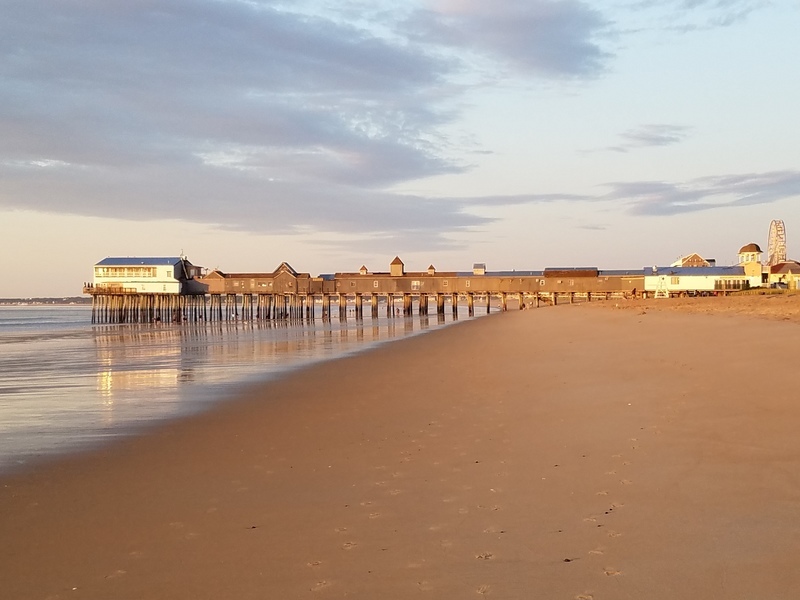 We left Maine on an absolutely beautiful morning and the rest of our trip had equally as good weather. Our route through New Hampshire and Vermont took us on some absolutely wonderful back roads. They blew away the roads in Canada and were some of the highlights of the trip. 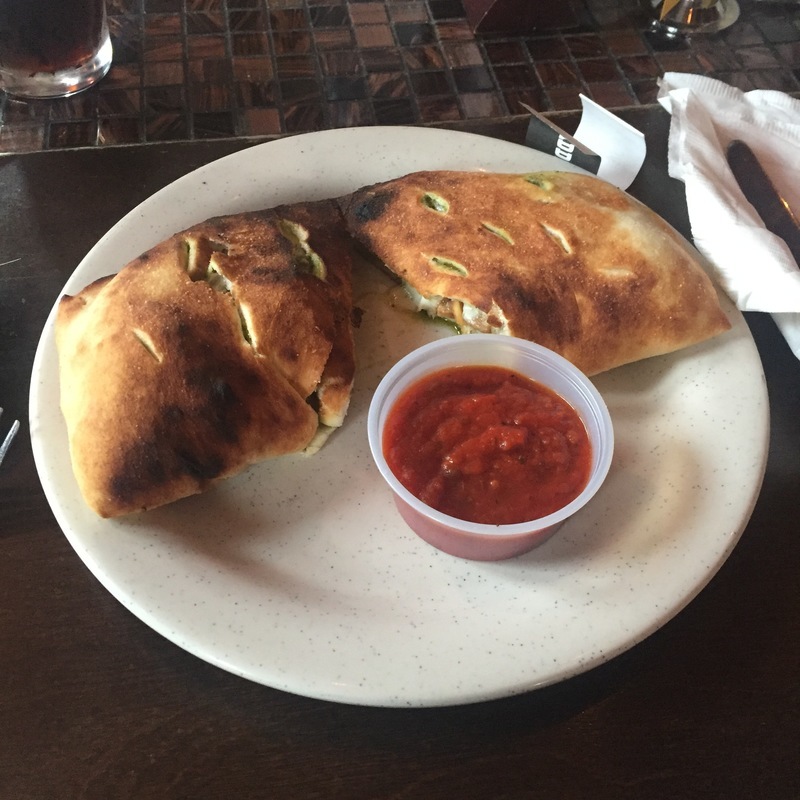 Lunch was a diversion from our scheduled stop, but took us to a place called the Firehouse. It was an old firehouse converted to a restaurant. I had a great calzone there for lunch.

Download IMG_3502.mp4
Download IMG_3503.mp4
Our mid-afternoon stop was at the Ben & Jerry's factory in Vermont, but as you can see from the videos above, it was ab absolutely mad house. The line to get ice-cream was probably 60 people deep. We unfortunately did not get to see a tour of the factory. 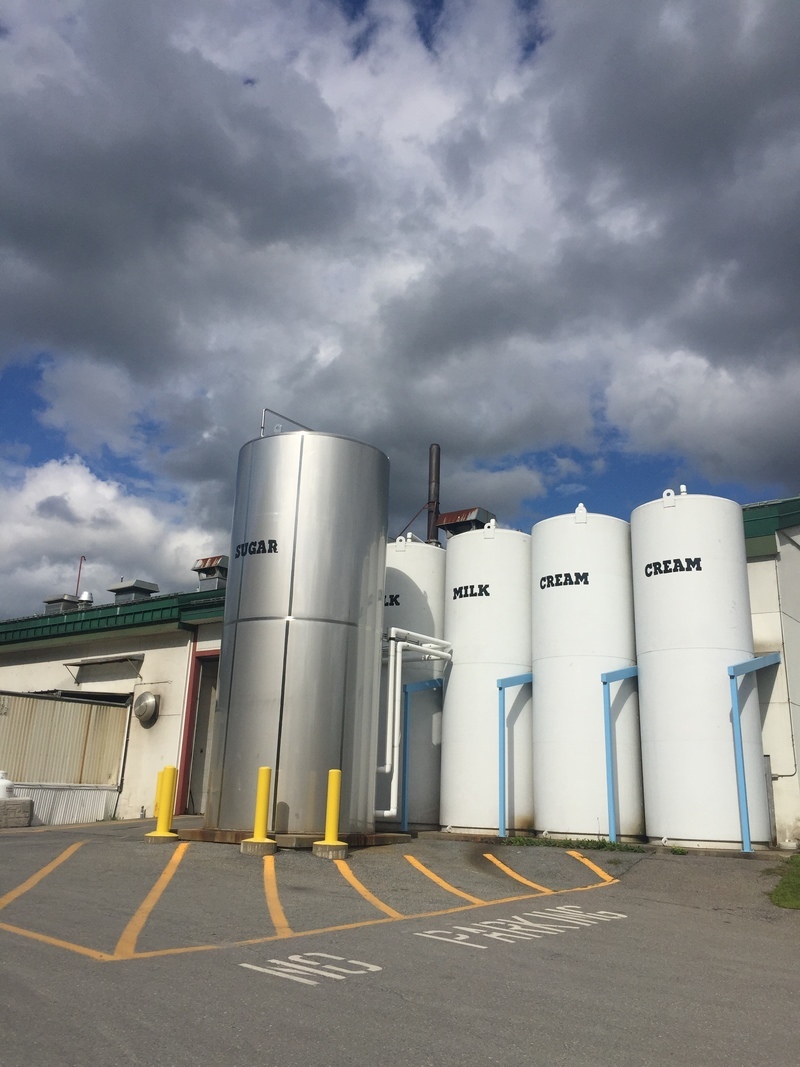 We took a quick shot at the flavor graveyard before heading back on the road. 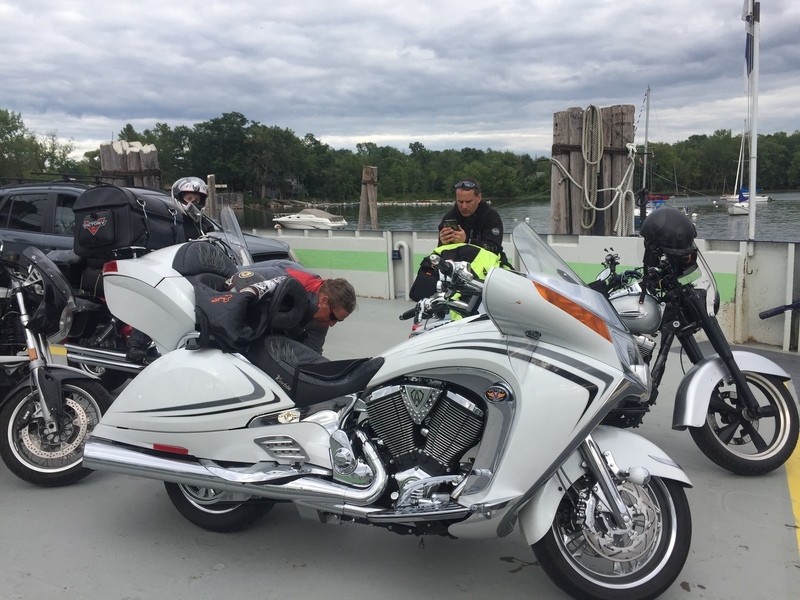 We hopped on a ferry to cross from Vermont to New York. The cost was $6.75 for motorcycles and it offered us a nice break from riding while we transferred into Lake Placid. Our hotel in Lake Placid was very clean and nice (Best Western) and was right across the street from the olympic ice skating arena.

Dinner was some BBQ next to the hotel. 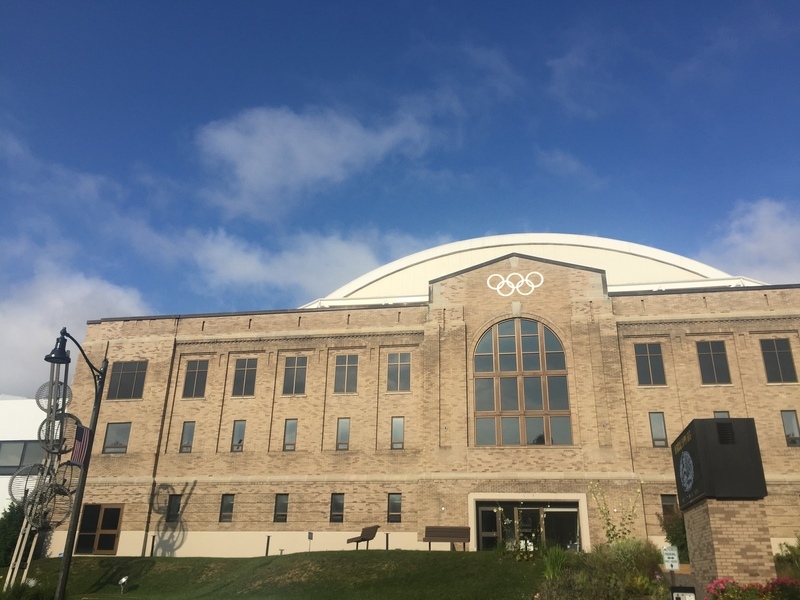 Leaving Lake Placid offered us some wonderful scenery and one of the very best roads in the whole trip on Forest Home Road. It was our last great day of riding and really was wonderful.

That afternoon though I had a run in with a bee or wasp of some sort. It stung me on the neck while riding. A Rite Aid was about four miles away and we headed over there to get some medication. The pharmacist recommended I take Claritin instead of Benadryl. Thankfully I was fine with no significant swelling. The ride to the hotel was painful, but the next morning you barely would have been able to tell that i had been stung. 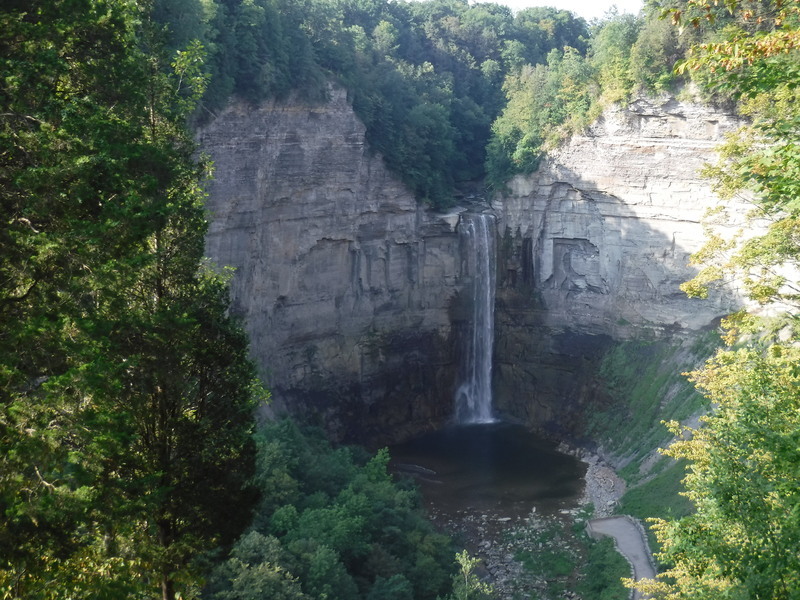 Day 9 gave us one last stop at Taughannock Falls and unfortunately the rest of the trip was largely highway back towards Chicago. We hung out with a Goldwing riders group at a gas stop and they recommended a lunch stop near Jameson for us to check out call the Hideaway. 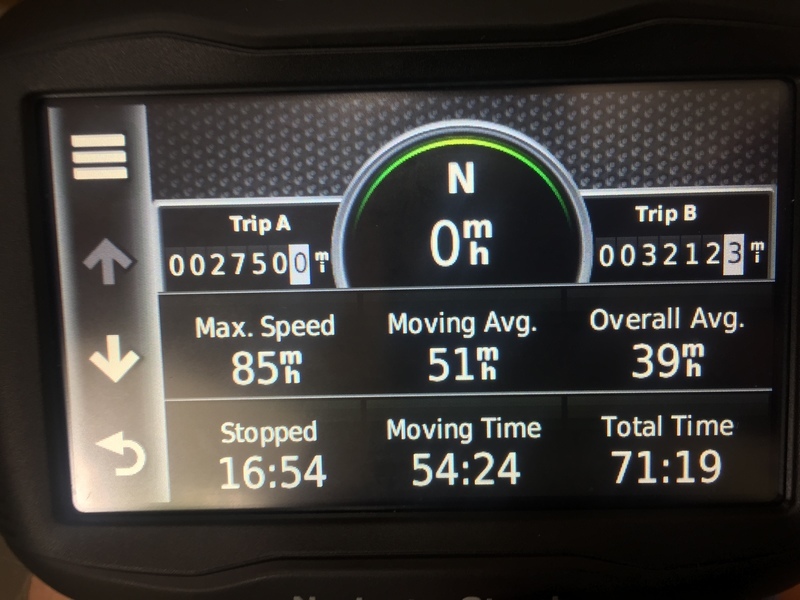