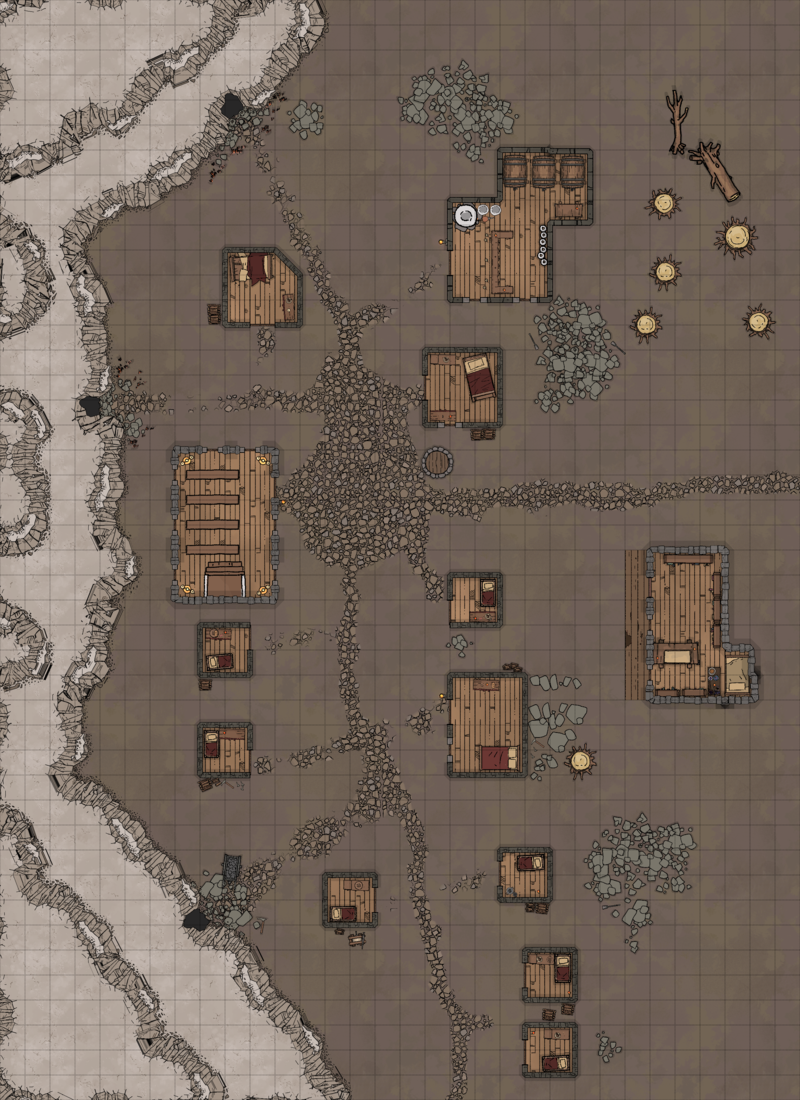 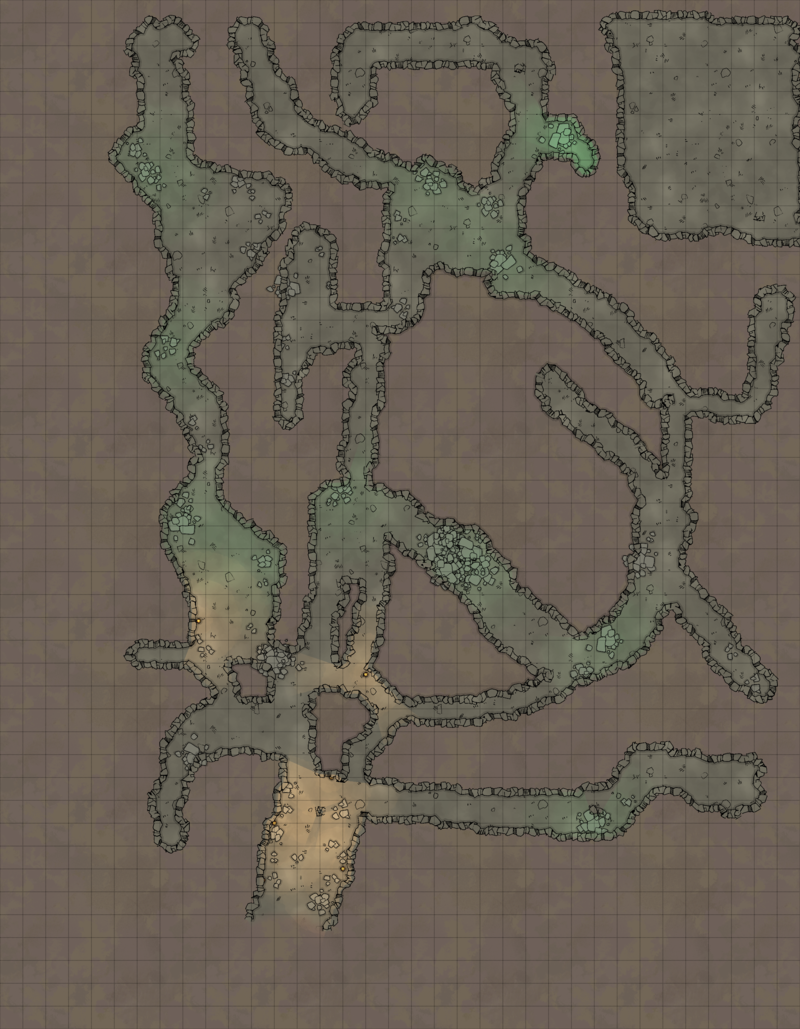 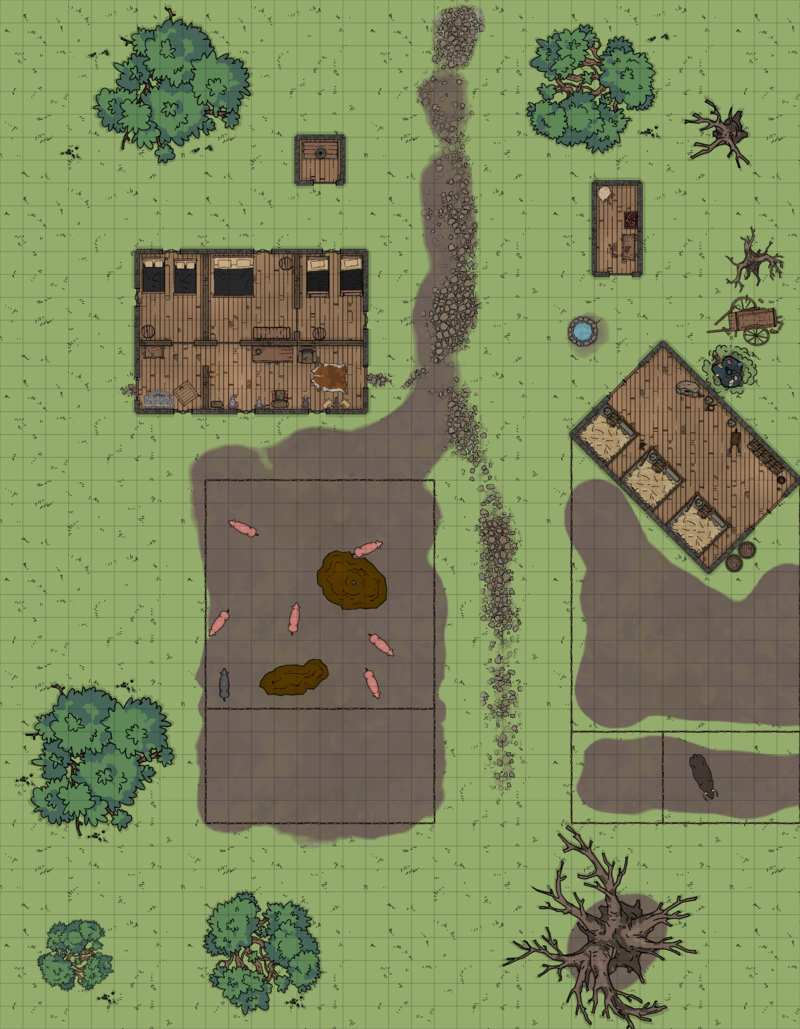 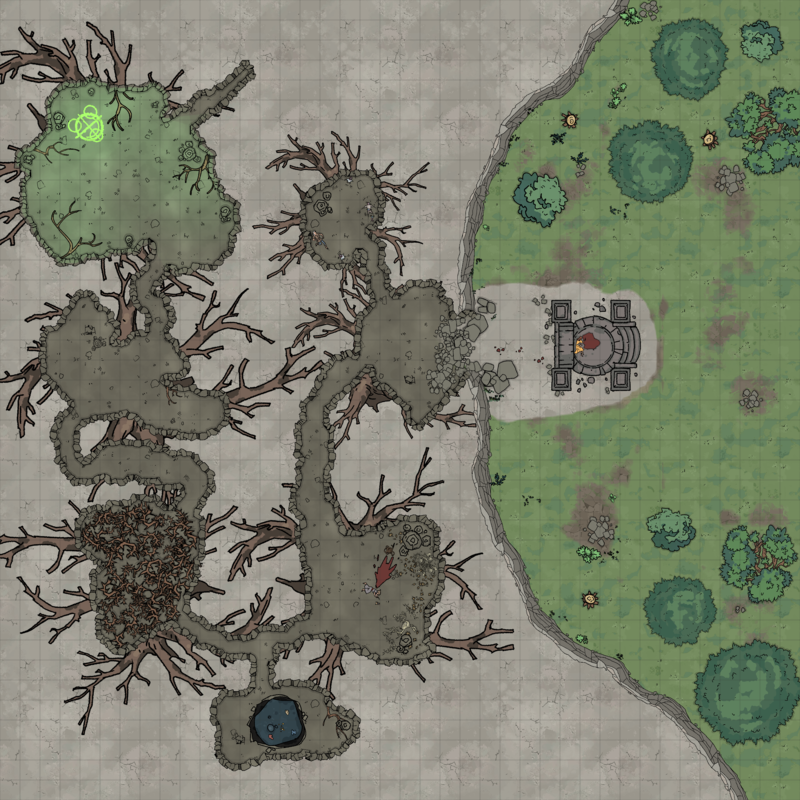 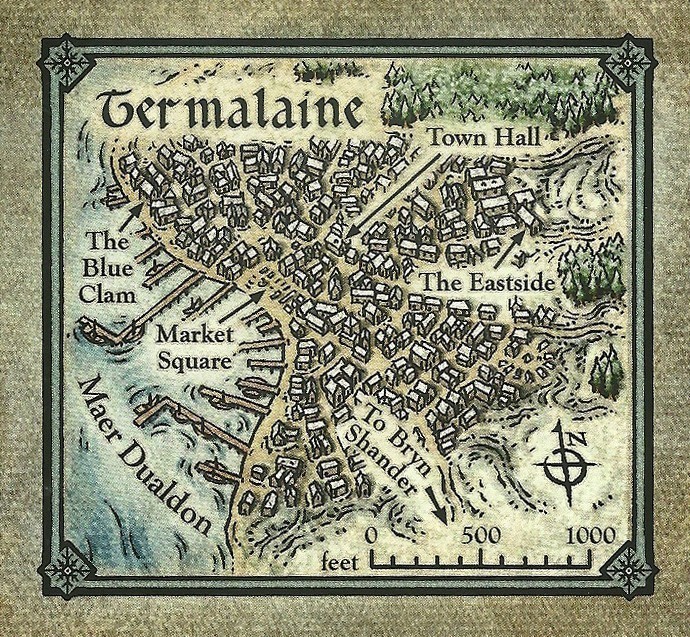 I have been DM'ing for almost three years now, playing the same campaign in Storm King's Thunder with my Friday night group. Through all of that period I have gone back and forth on trying to keep myself organized as the DM. I have admittedly struggled to keep a good track of my notes through the campaign and in general.

I have wanted to approach D&D in as analog a way as possible. I spend so much time online and on the computer as it is, bringing that to the gaming table seems counter productive. That being said, there is an endless amount of functionality that a laptop or note taking software brings to the table, that it would be foolish to try to manage all of it in paper alone. I have finally over the past year or so begun to develop a system that works for me on keeping track of my notes, etc.

My first stop here is the use of a Tūl paper notebook. As I noted above I want to be as independent from the computer as possible at the gaming table and my quick reference notes during a gaming session are all being placed right into this paper notebook. I fund this Tūl system to be fascinating because of the ring bound sheets which allow you to remove pages and re-arrange them in any order. I have used spiral bound notebooks in the past and they have worked fine, but I have run into two primary limitations with them. 1) What to do when you have narrative or note changes that required you to re-arrange pages and 2) what do you do with the notebook if it is only partially filled and you are done with what you need with it?

The Tūl notebook solved both of those problems for me and I picked up the smaller format size which works well for sitting at my side on the gaming table. The page size is exactly one half of a standard 11x8.5" page, so creating a few templates in Apple Pages is pretty easy and straight forward.

I think I want to add some supplementary reference material to it as well, including some quick random tables along with a master index sheet for referencing back to the various books.

Apple Notes, and Evernote before that, are the cornerstone of where I keep track of all of my documents. In Notes, I have sub folders where I keep the text I write out along with .PDFs, images, and ideas for the campaign I am running. Up until recently, I was keeping a running campaign summary and NPC list in Notes, having that pinned to the top of my notes list. This worked well, but wasn't the best for quick reference during the middle of an active gaming session.

I have moved more to a method of using Notes to capture my pre-session planning and ideas. What I have begun to do now is create a new note for each location or story plot and incorporate the relevant NPC's, and information needed for that section into that session. 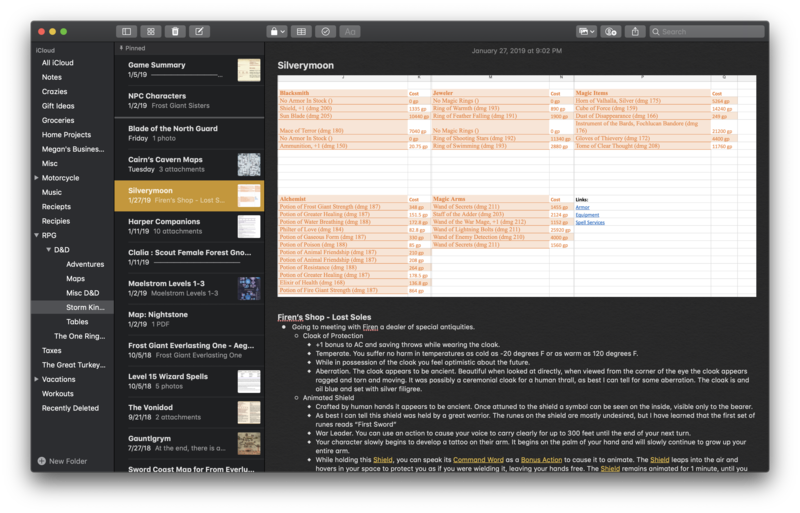 I am also using Apple notes to capture various D100 tables that I find online for adventure planning.

Over the next couple of months I hope to begin development on some home-brew adventure planning. I feel my Ebenere Nanowrimo story for a few years ago would make for an excellent setting to place a campaign in.

Mind mapping is one of those things that I can recognize the utility, but I haven't really taken full advantage of. I experimented with it a little bit for my current campaign, but I think it hasn't been successful because I didn't start using it from the beginning. The result is I haven't had a good amount of connecting ideas to develop with the narrative. You can see my poor mapping laid out below when I tried to pickup with our party in Gauntlgrym. 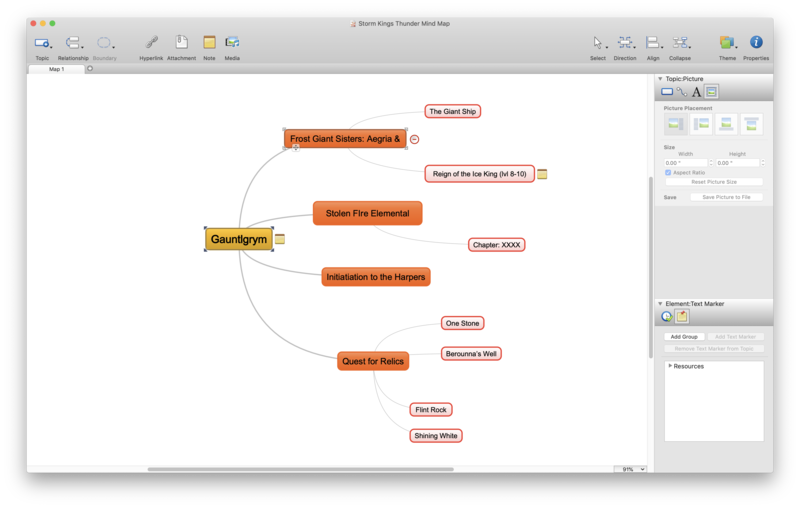 When I begin a new home-brew campaign, I anticipate this will become critical for mapping out the overall story arc though

Omnioutliner is a great outlining and note taking app. I anticipate this will also become a core component for my future home-brew campaign as I chart out future NPCs, characters, etc. You can see below my failed attempt at trying to keep track of items in it for the SKT campaign. 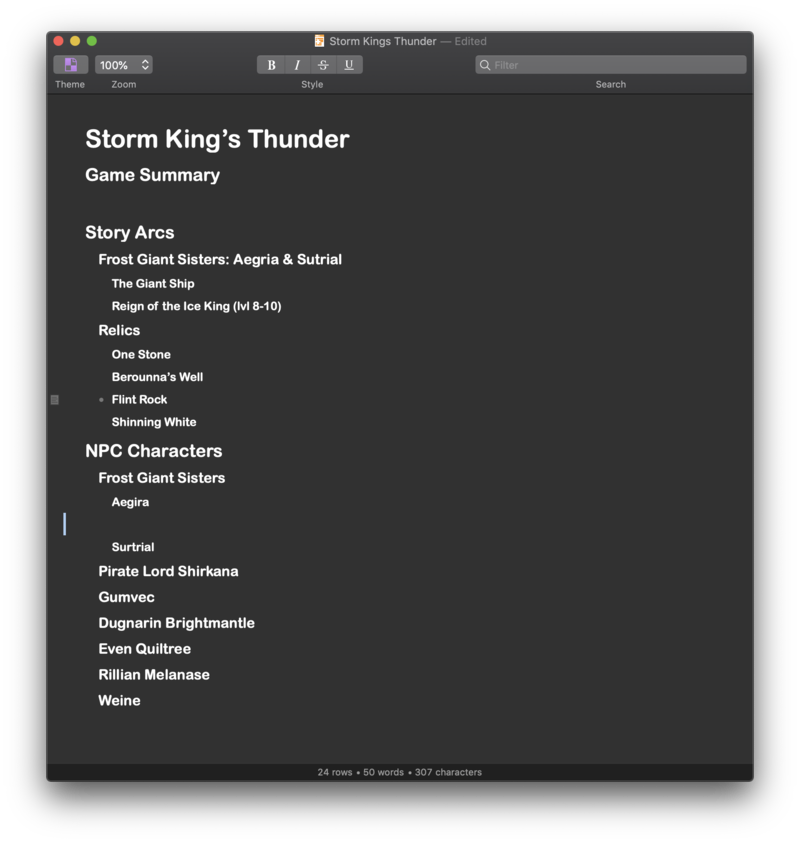 Last week we had what was arguably a great or a terrible D&D session, depending upon where you were sitting around the table. Our adventurers found their airship crashed and in disrepair in the middle of grasslands, just west of the city of Longsaddle. 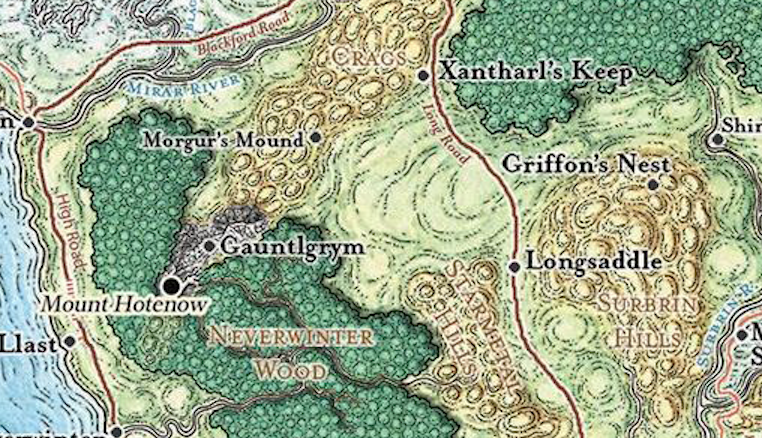 Having successfully defeating attacking pirates, our group discovered, while going through the wreckage of that airship (also crashed), twelve slaves who were chained in the lower hold, forced to power the airship with their labor.

Our group decided to free the slaves, but they now had to deal with the additional mouths to feed and bodies to take care of. Weak from their tireless labor and malnourishment, the slaves were all but helpless. Our adventurers had also lost three of their eight crew members during their crash and their ship would take four days to repair it.

That evening we had a new player joid our group to play and I slipped them in as one of the freed slaves. Our evening seemed to start off to a good start, until I decided to roll for a random encounter. In front of me was a d100 table that had a large number of random encounters that varied depending upon the terrain in which our party found itself. Most of the time when I roll from this table, the encounter is innocuous. Sometimes some bandits, sometimes a weather event, more often than not, nothing at all. This evening though I rolled a 66. Looking through my table and checking the  terrain for grasslands I found that the encounter was 1d4 frost giants. 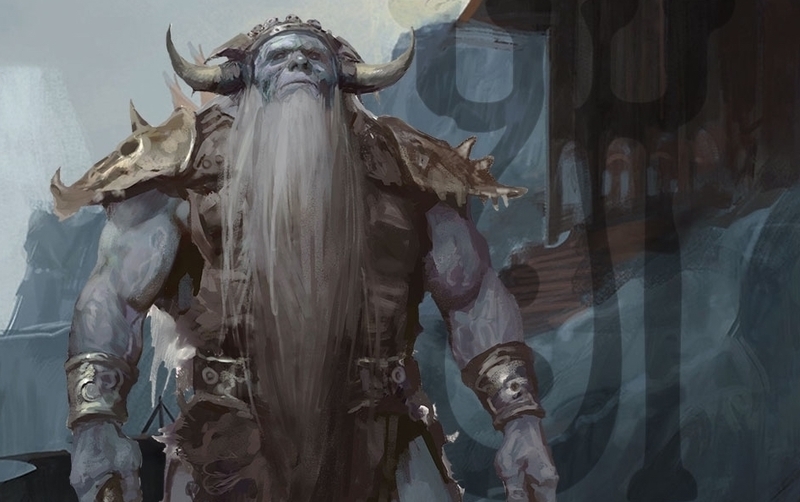 "Ohh," I thought to myself. "This should be interesting". I rolled the 1d4 and up comes a 3. Three frost giants then emerge from the edge of the woods. Seeing the two ships crash in the night and the explosion of the fire elemental, their interest is piqued.

My party freaks out!!!

At first they think that the frost giants might not be threatening. After all, they worked with a frost giant called Harshnag only a few months earlier. Well, our party's assumption cost them dearly. When the giant's arrived, seeing the disrepair of the ship and the condition of our party, they ordered the adventurers to turn over all of their weapons, armor and valuables, which included three precious relics . This was all promptly thrown into a giant bag of holding. Our giants then turned and marched back into the forest, leaving our party with nothing, and 17 mouths to feed.

One party member, who is rather reckless, decided to charge into the woods after the giants to track them. He promptly failed his wilderness saving throw and got lost. The rest of our group spent the remaining three days repairing their ship and limped back to the city of Yartar.

Beaten and with their heads down they found that two of the slaves whom they rescued were nobles and upon returning them our party was paid handsomely, which allowed them to at least re-equipment themselves a bit. Things once again turned sour however. Our party was invited to stay in one of the noble's house as a thank you. Our new companion however got into a fight with another party member in the guest house, blew out a window and had the party promptly thrown out of the house.

Our other member (barbarian) who ran into the woods did thankfully have ten days of rations on him. He was able to stumbled to the city of Triboar and now needs to either work or find some way to get himself to Yartar. And that is where we left our party that evening.

I came away rather amused with myself, quite pleased with how defeated the party was. My players? Well, they walked away rather upset, perhaps arguing to me that I shouldn't have gone with what the dice rolled from the random encounter table. The best part is that several members were not in attendance last Friday and they are going to show up this week and find that they have lost everything in the matter of a week,

We'll just see how everything plays out.