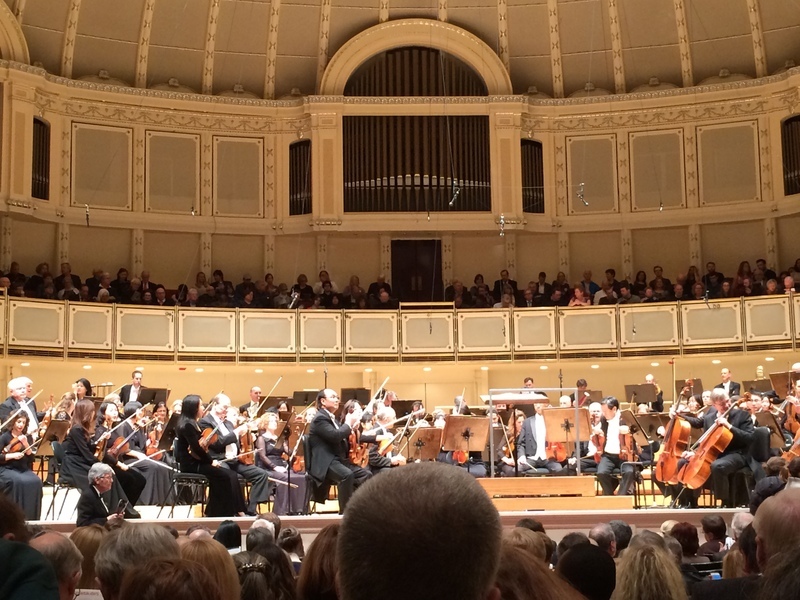 This past Saturday Megan and I had the opportunity to go out and see the Chicago Symphony Orchestra at Symphony Hall downtown. I never had the opportunity to go see the CSO before. They performed Brahms' Piano Concerto No. 2 and Tchaikovsky's Symphony No. 1. Both were quite fantastic. There really is something special about seeing a performance like that live. And more, the Symphony Hall is such an intimate performance center. Our seats had us dead center on the main floor and we couldn't have been more than forty feet away from the Orchestra.

It was also a wonderful opportunity to get dressed up, which many people don't do too often anymore. Megan received two compliments on her dress within minutes of sitting down for dinner. Speaking of dinner, we ate at Tesori which is located in the symphony building. A nice restaurant that isn't too fancy or expensive. Excellent drinks too.

We had a fantastic time at the symphony and in short we need to make it a regular thing. It was way too fun. 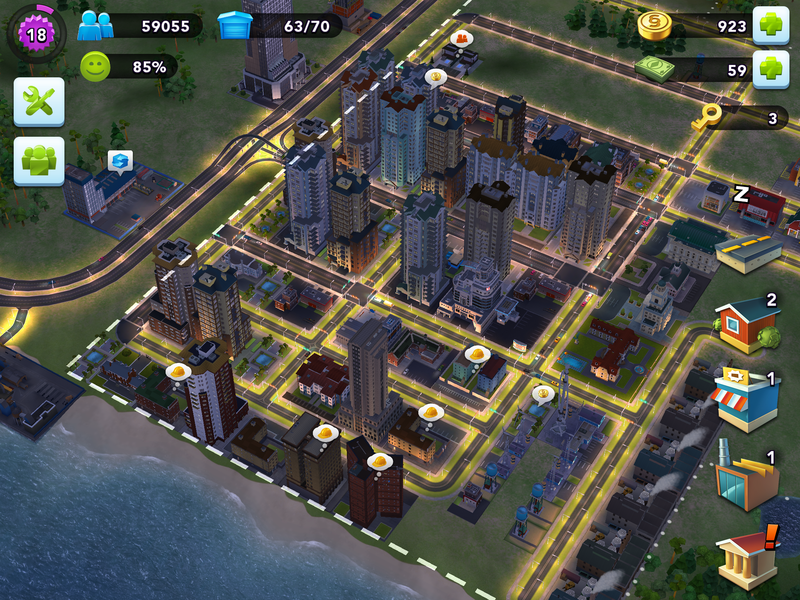 I don't normally play games on my iPad or iPhone beyond something simple to pass the time while waiting in line. I have always preferred to play games on dedicated gaming devices. Over the Christmas holiday though I downloaded SimCity BuildIt for my iPad. I also made the mistake of introducing my wife to this game.

SimCity was one of those games that always stuck with me when I was a kid. SimCity 2000 in particular was this perfect mix of resource management and expenditure. The new game, Buildit, which is available on the iPad, takes a lot of its ques from last year's maligned SimCity for the PC. Where that game seemed to fail with gamers the model seems to hit really well on the iPad. Perhaps it is because of the F2P model or the sort of stripped back interface, but this game (which is free) pretty much hits the nail on the head IMO. It nails all of the resource management of the previous games and has the model fit surprisingly well for the sort of "Farmville" model of resource distribution.

In the original Simcity games your resource restrictions were largely constrained by your tax income. Here that resource constraint is spread out among different building materials. Yes, these have a time factor put onto them, but when you look back at the older games, they really aren't that different from the original concept. Back on those old PC games you were sitting, waiting, gnawing at your fingers waiting for that next chunk of money to come in. The satisfaction and anticipation is all there in this game and I am surprised to say that EA has handled the P2P aspect rather well. I haven't felt the need to buy anything to further my city, which in some ways is too bad. I personally have no qualms about putting in a few dollars to support games I like, but I wish I could put in some money into something besides getting in game cash to speed up builds. Something like a unique tile set of high end buildings would be totally reasonable for me.

One thing that has really surprised me though is the level of detail going on. Most recently I had to build a hospital for my city and I had several abandoned buildings because of it. After I built the hospital, small ambulances drove out from that hospital and then went to my abandoned buildings. Upon returning to the hospital those buildings began to fill up with people again and my population rose. That was a surprising detail that I thought was really well crafted. I had another similar instance once when I had a building that didn't have garbage service, so you could see bags of garbage being thrown out of the windows into a pile on the side of the building with seagulls circling overhead.

A surprisingly well crafted game for what it is.

People seem to keep asking me what my goals are for 2015. I guess I don't really have any specific goals laid out for this coming year, but after thinking about it for a while I think i do have a couple of objectives I want to achieve.

That's it. Two hobbies I enjoy that I didn't do enough of last year.

This past year was not a super successful one with respect to writing music. I spent a good part of this past year trying to rebuild my hardware setup and thinking about what I wanted to do with my music. I swapped out my Yamaha AN200 for a Waldorf Blofeld and have been pretty happy with that decision. For most of the year I had been writing with only three pieces of kit.

My Korg EA-1 has been in my line up for as long as I can remember but at the beginning of 2014 I couldn't quite find the sound I wanted out of it. I spent months doing research and trying out other synth boxes to see what could fill that void. I looked at the Dave Smith Evolver and Mopho. I looked at the new Korg Electribes and even the Waldorf Pulse II. In the end though I ended up putting the EA-1 back into my lineup. The EA-1 isn't exactly a powerhouse synth. The engine is simple and fairly sterile sounding and the box only has a lowpass filter on it, but it has always done a pretty good job at basslines and some arp'd leads. The easy and intuitive interface though is really what keeps it around. It is clean and simple with no menus to dive through. All of the parameters can be easily accessed on the front panel and I couldn't find another box that allowed for the timbrality so easily.

So back it went into the lineup and I decided to pickup a Tech 21 Flyrig 5 guitar pedal to supplement its sound. The combo has worked out surprisingly well and the Flyrig 5 gives the EA-1 that little bit of grit and character that it sometimes needs. The Flyrig also has a buttery smooth sounding delay on it, which I think when partnered with the EA-1's own internal delay can result in some really facintating effects down the road. The EA-1 ended up having a nice place in my most recent song, Lowered Fog and I feel it is going to continue to sit in my line up for years to come.

I have felt energized the past couple of months and in part that has been to a Facebook Group called the Groovebox Society. So here's hoping to a much more productive music year.