So Nanowrimo would normally be gearing up right about now and it would be starting on November 1st. I have done it successfully the past two years, largely on jumping in without much preparation. Despite all that success I am taking a pass on participating this year. I am instead going to focus my efforts on putting the same amount of time into recording music through the month of November. I have nearly half a dozen songs sitting that need to be finished and it is just a matter of me getting down to it and finishing it. I really want to get a new album out and published before the end of this year.

After that is complete, I can then spend the rest of the winter trying to edit the books I have written from past Nanowrimos. 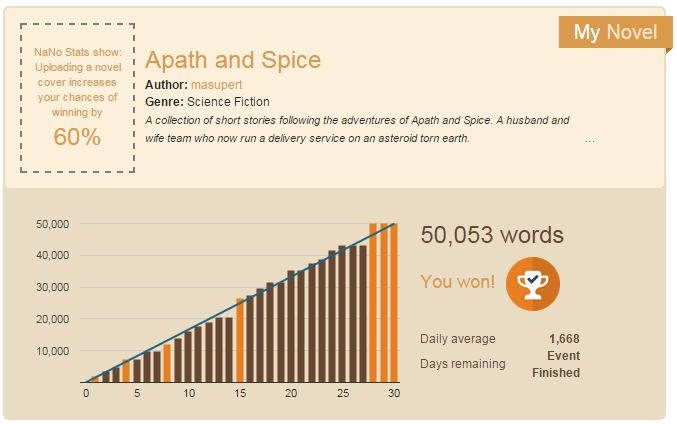 Well, we are getting down to the wire here. Just about a week left for Nano. The past week was a fairly difficult one and was more of me just sort of spilling words onto he page opposed to an actual story coming out. I literally had three or four story progressions occurring on a single idea before I was finally able to sort of solidify it into some comprehensible. That mash of ideas though is still just sitting in the document file as a complete mess.

I started another segment over the weekend, which I like the idea of, but haven't figured out a way to fully flesh out. I was going to have my main character just walk through the city and just describe and characterize the city itself, exploring some of the different neighborhoods and locations. I want to keep it simple, nothing dangerous or violent happening to him. I got a good way in, but eventually hit a brick wall. It is an idea I like, but need to figure out a way to make more interesting.

I started last night my revenge tale, which should be good for pumping out some words. I am sitting at 38,844 words as of yesterday, so I think I am in pretty good shape. It is going to probably be a good push though through this weekend.